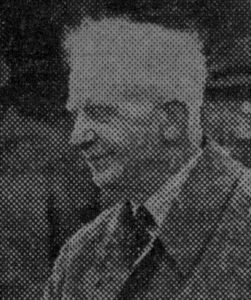 No birth or death records were found initially due to searching under the name William.  Birth and death records were then discovered under the registered name of Willie, however he is alternately named as William on documents other than birth and death certificates.  He married in 1922 under the name of William to Agnes Russell Beattie in Cambusnethan which is in Wishaw, North Lanarkshire, and died in nearby Carluke aged 76 (20 miles or so SouthEast of Glasgow).  Agnes was born in Cambusnethan in 1897 and died in Aberdeen (26 Cornhill Road)  in 1973.

At the time of marriage, Willie lived at 38 Hamilton Street, Motherwell, and Agnus at 112 Glen Road, Wishaw.  The marriage was witnessed by brother Robert McKay from Lockers (who subsequently emigrated to Canada in 1926).

Agnes was a restaurateur (and therefore employer) probably having taken over that position from her mother, or perhaps branched out in her own right. Willie was a Detective Constable in the police force when they married.  He and Agnes had one surviving child, a daughter named Helen Baird McKay, in 1929.

Agnes had an older sister by two years, Jeanie.  Their mother Helen (m.s. Baird) and father James Beattie lived in Cambusnethan Main Street at the 1911 census, having married in 1894.  Agnes’ mother Helen had given birth to 4 children in total, but only the 2 girls survived into adulthood. James was an engineering brass finisher by employment. 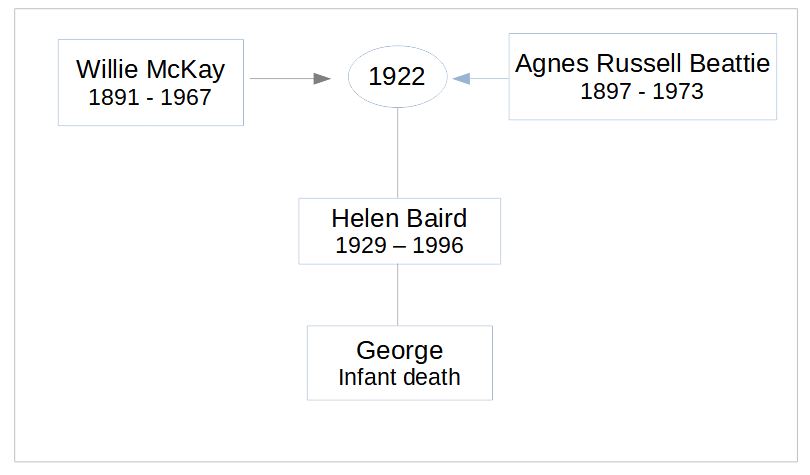 Willie and Agnes’ daughter Helen was a clerkess /typist by profession (Motherwell and Wishaw Town Clerk’s Office 14 years), but married a farmer from South Blackwater, St. Fergus, Peterhead, a John Farquhar.  They married in 1963 in Carluke, and at that time Helen’s address is given as 13 Woodburn Avenue, Airdrie, she aged 34 whilst John was aged 44.  They had moved to Lochlip Farm, Rathen, Fraserburgh by the time mother Agnes died.  Helen died in Turrif in 1996 of cancer. 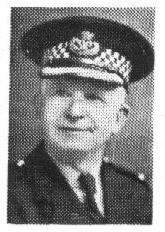 Willie retired from the police force as a Detective Inspector after a 40 year career spanning 1911 – 1951.  An obituary for him in ‘The Gazette’  of December 1967 can be summarised as follows:-

Mr McKay, a native of Keith, joined the Lanarkshire constabulary in 1911.  He served as a constable at Motherwell, Bellshill and Larkhall before moving back to Motherwell as a Detective Constable in 1920. In 1925 he wqs promoted to Detective Sergeant and moved to Cambuslang and later to Airdrie.  In 1932 he shifted to Lanark and remained there for 15 years.  He became an inspector in 1939 and during  the war years he was an inspector in the A.R.P. for the upper ward.

He moved to Carluke in 1947 where he served until retirement in 1951.  He was known in the police force as a respected and popular officer.

A member of St.Andrew’s church, he was ordained as an elder in 1955 and became a Presbytery Elder in 1963. He was also a member of Carluke bowling club.

More detail on Willie from newspaper clippings – Click Here (open in new tab or window if need be to scroll or resize).