Peter married Isabella Robertson, whose father and mother were John Robertson (farmer) and Maggie Fraser, at Newmill in 1909.  At the time of Peter’s death they lived at 18 South Street, in the village of Newmill to the South of Lockers.  He was a ‘General Carter’ transporting goods and people to their target destinations by horse-drawn vehicles including sleds in the winter when necessary.  Most likely to have been farming related activity.  He died of heart disease, death registered by son-in-law Gordon Geddes, also of Newmill.

Before they were married, Isabella had had a child named Isabella Coull whose father was a William Coull.  Isabella Coull (1906-1934) died at Hill Street Newmill, of Bronchitis and Heart Failure.

Isabella McKay died of illness following ‘injuries from a cow’.

Jeannie’s middle name Littlejohn is interesting.  There was a Francis McKay born in Newmill 1855 whose father was Alexander McKay of Inveravon, Glenlivet, and Francis married a Janet Littlejohn in Keith in 1884.  There seems to be a suggested connection between Francis (and/or Janet) and Peter William (and/or Isabella?), prompting the introduction of the name Littlejohn in this family line. 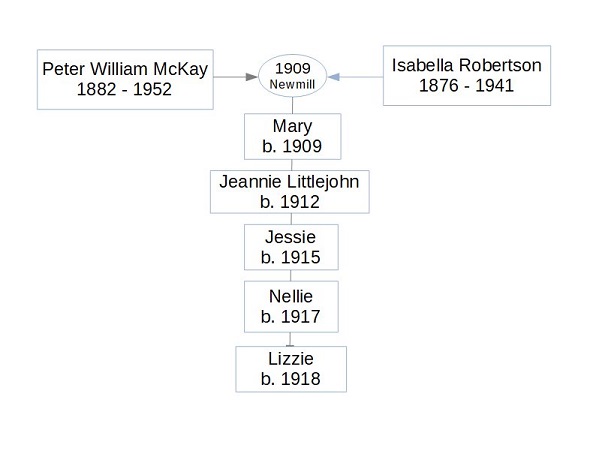