Known always as Billy to the family (in later life as Bill to friends and colleagues), he was born in the Turner Memorial Hospital, Keith, Banffshire. He started life a couple of miles to the west of Keith  when Roger & Lizzie farmed at North Bogbain, but the family were on the move to Tarland soon after. Memories of visits to Montgrew farm later in the following years are few and faded. Both farms were out of McKay hands by the late 1950s, the status of Montgrew's financial balance sheet perhaps having impacted the sustainability of North Bogbain in some way.

Bill married relatively late in life at 36, to Karen Lynch from Glasgow.  They have no children and are both now comfortably and happily retired having survived busy and relatively successful/rewarding working lives in Edinburgh's aggressive IT financial sector (Bill) and Edinburgh's demanding council housing management (Karen).  See career links below if interested.

Karen (née Lynch) was born in East Glasgow in Denistoun, Melbourne Street.  The street is still there but that building no longer exists.  It was as close to the heart of Old Glasow as anyone could wish for, which makes her an original 'Eastender'. They met when Bill was working as a computer programmer in the IT Department at Glasgow's Queen's College (now subsumed under The Caledonian University). 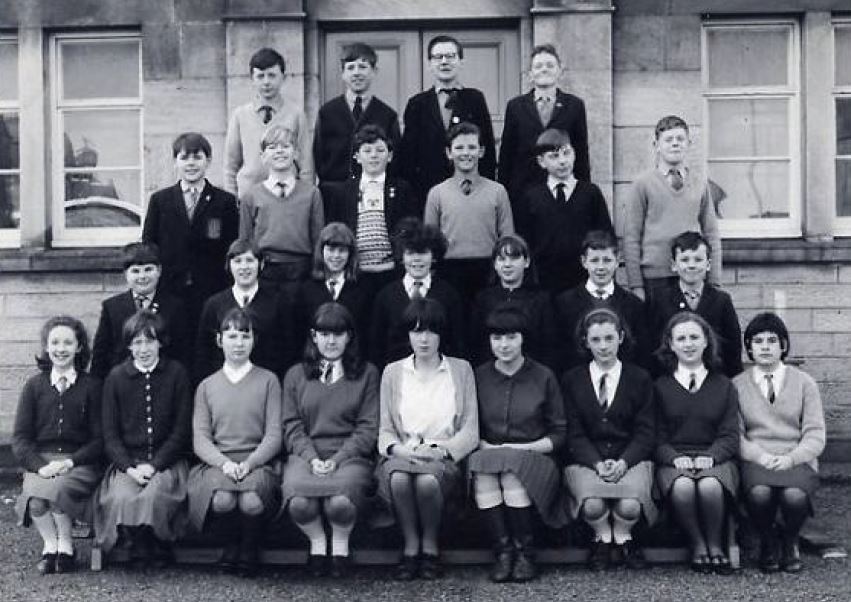 Thanks to John Mackintosh and Chris Muir for update on some of these names, and I also saw this photo on Facebook 2018 with some detail.  Apologies to those whose names I have forgotten and have come across this web page - please get in touch.

Religion and spirituality are discrete entities for some people, who describe themselves as either spiritual but not affiliated to any religion in an attempt to avoid (as they see it) unwanted labels, or as religious whilst downplaying (without properly acknowledging) the existence of the supernatural.  Many others of course 'choose' neither.

In the interests of brevity whilst just adding some information on what has shaped Bill's life to date, it is necessary to declare simply that spirituality (the supernatural) affiliated to Christianity are driving forces for both Bill and Karen.  Before you get the wrong picture, we are down to earth, feet on the ground people.  Nothing spooky to see here, we simply have a heightened awareness of our human spirituality - we all have it!  We're neither evangelical nor charismatic.  We don't dance wavy-handed under moonlight with accompanying mystic mood-music, although true contemporary Christian conference experience can seem to veer towards what being a 'respectable' hippy could have been like in the 1960's when compared to a traditional Scottish protestant upbringing.  Like Woodstock of 1969 but for Christians and without the dope (as far as we know)!

It wasn't always so for Bill as 'close' family would no doubt be quick to say (regular attendance at Alves church Sunday School as a child during the tenure of the Rev. Blackadder probably doesn't count for much although never forgotten), and he would personally not deny his 'wilderness years' of misguided and ignorant behaviour which led, ultimately, to a period of soul searching and life changing events culminating in what has become a firm set of belief constants.  So no longer misguided, but the jury's still out on the other some might say from their distant judgemental armchairs who do not yet really know him!  If this is you, you are forgiven, unconditionally.

Bill and Karen are members and elders in the Church of Scotland.  Karen has a lifetime of dedication with almost 40 years as an elder, Bill 25 years a member and 22 years an elder as at 2019, through the grace and gift of the Rev. John Young at Liberton Kirk, Edinburgh.  Both are of course devotees to its hierarchy and systematic doctrine, including confession of faith in The Holy Spirit and The Communion of Saints, amongst other specific declarations.  Karen is Assembly Officer at the Church of Scotland annual General Assembly in Edinburgh.

Bill and Karen hold a lot in common in terms of world perception - how we see the world and our place in it -  although it has to be said we have travelled slightly different roads on the way to getting here.  Religious views do not (for us) preclude a healthy open-minded outlook on life and acknowledge there are different ways of living and facts of life which, whilst not necessarily subscribing to, we nevertheless accept as part of life's rich pattern.

For generations families have in general been closed units as far as protecting members and presenting a sanitised family picture for public consumption.  That's as it should be, mostly, and people choose for themselves the degree of exposure according to their own 'family tradition'.  As a rule, no deeply controversial or inaccurate facts about any individual will be knowingly shared via this website.