Norris (a.k.a. Roger to family and friends) came out of Montgrew farm near Keith, which his father John took on through marriage to Ida Masson (step-daughter to John Robb), probably around 1905, the year they married.

Elizabeth a.k.a. Lizzie (née Coull) came from nearby Rothiemay in Banffshire, click here to go to Lizzie's page. Roger & Lizzie both passed away in 2007 after long and fruitful lives. Both from large families, Roger was the 7th of 15 children (who survived infancy - there were more!), Lizzie one of 11, they were amongst the last of their generation, and together contributed to the new generation to the tune of 6 children. 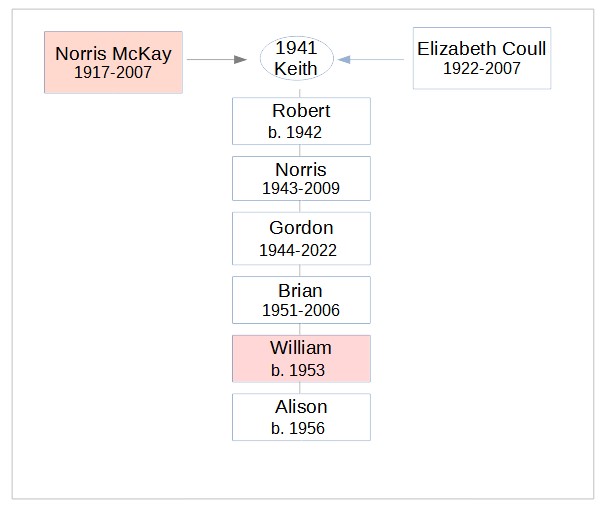 ... Stop Press: 22/08/2020. Click the arrow to the left to stop/start fiddle music from Roger himself.  Son Billy came upon a reel-to-reel audio tape recorded in the early 1970's and compiled this 2-minute medley from it by running together 3 tunes from Roger, recorded at home.  He had large hands (to match his large feet), but the dexterity of large fingers on a comparatively small fiddle fingerboard never seemed to be an issue for him.

Roger was an accomplished fiddler, and for many a year entertained patrons of the Imperial Bar on South Street, Elgin, in a regular Friday and Saturday night engagement, accompanying Bert Fyfe who played accordian to a similarly high standard, and before that, Jim Cameron from Forres who played button accordian superbly. Amongst his fiddler heroes were (James) Scott Skinner, the 'Strathspey King', and William Marshall from Fochabers, both legends in the early 20th century (as now) in Scottish music circles.

Roger appeared on an early Scottish Television entertainment competition entitled 'Bothy Nichts' which emulated the farm bothies of days gone by in which farm workers gathered in the evenings after work was done for the day, in the farm bothy where the single men were lodged, to sing and and dance and play music (nae too sure where their energy came from after a day's work), to tell stories, and no doubt to have a couple of drams of whisky along the way. It was approximately 1965, and with a group of friends and acquaintances from the Forres, Alves, and (I think) Knockando area to the South of Elgin. The television appearance failed to win any prizes, but thrilled everyone even though it was transmitted in black and white pictures in those days.  As well as Norris, the team included Jim Cameron from Forres (accordian), 2 girl dancers from the O'Driscoll family in Alves, plus a couple of other singers & musicians (a young woman, name forgotten,  and a highland character from the Knockando or Aberlour area, name also forgotten, who sported an impressive and bushy full beard).  Practices for the competition took place in the empty bothy next to where we lived at the time, at Seafield farm near Forres.  No recordings of it can be found, but here's an authentic youtube sample of a real bothy ballad.  Singer Charlie Allan was and is a well known name in the NorthEast.

He walked with a barely noticable limp or rolling gait, the legacy of a badly broken leg resulting from an accident whilst waiting with the horse and cart he had taken to Keith railway station to transport one of his sisters arriving to visit Montgrew. The horse was startled by a loud noise and the wheel of the buggy did the damage as the animal raced away from the scene.

Horses featured large in Roger's early life as they did for everyone of that era. Montgrew farm was no exception and he had silver cups and medals won at ploughing matches with a pair of Clydesdale. Roger was brought up at Montgrew. There are few if any surviving photographs of early days, but there was one of Roger at perhaps 10 years of age or younger clearly enjoying summer weather and smiling and barefoot as was the custom for children of the time, whereabouts of the photo now unknown.

The majority of Roger's working life comprised farming of one sort or another. At Montgrew during and perhaps after WW2 Italian prisoners of war were to be seen on the land. Roger and Lizzie moved away from Montgrew to manage North Bogbain 2 or 3 miles to the West of Keith. The webmaster of this site, Billy, spent the first couple of his years at Bogbain, but thereafter Roger took work as farm grieve (supervisor or day to day manager) at various farms around Tarland (farmer Lady MacRoberts, Seafield estates), Earnside near Alves (farmer Forbes, perhaps?), Mains of Alves (farmer Jean McKissock), and eventually Seafield (farmer Jimmy Robertson) near Forres, where farm life came to an end and the family moved to Elgin approximately 1967 (aged 50). Apparently after WW2 he had been offered the opportunity to move to Ashford, Kent in the South of England as a farm manager, and declined for reasons that will never be known.

The remainder of Roger's working life was spent at Elgin Sawmills as a sawyer and saw 'doctor', developing a good knowledge of the different timbers and where they originated from.

Roger was a keen reader, often travel, geographical or non-fiction books. As a schoolboy he apparently studied Latin and French at Keith Grammar school and also remembered topics from Science and Mathematics amongst other things, presumably not to a very advanced level, but nevertheless regretted not having had the chance to further his education to higher level.

Roger's children do not all have individual pages allocated on this website, so short biographies are included here below to help the reader know a little more about who they are/were as characters - some of them are now deceased.  Grandchildren may be included within separate family lines elsewhere on the website.

Disclaimer: The information here is correct as understood by the author at April 2019.  If any of it seems incorrect or otherwise needs amendment please contact me, Bill McKay, via the form on the website Contact page (or directly by email if you happen to know my email address).  I will be more than happy to make changes requested.

Robert was born at Montgrew.  When the family landed at Earnside farm near Alves in Morayshire and Robert had left school, he started work in a plant Nursery before eventually deciding to join the Army voluntarily around 1958 (conscription into the armed forces formally ended 31st December 1960, but he would have been too young for call-up).  He served most of his time in the RAOC (Royal Army Ordnance Corps) at Aldershot with service overseas in Germany and British Honduras.  On leaving the army, Robert was a truck driver at the onshore naval base of RNAS Fulmar in Lossiemouth (now RAF Lossiemouth), and for the North of Scotland Hydro Electric Board.  He married Jean in 1969 and had a family of two in Elgin, Scott and Michelle, both of whom are now also parents themselves.  Robert completed his working life as a Welder involved in the fabrication of Oil Exploration Platforms.  He and Jean are retired and live in Elgin.

Norris was born at Montgrew,  He also chose to enlist in the armed forces at an early age about the same time as Robert, following work as a house painter after leaving school, but he joined the RAF instead as an aircraft fitter engineer.  He had been an army cadet whilst at school whereas Robert, conversely, had been an air cadet.  He served at various stations in England with an overseas posting to Salalah in the Persian Gulf before posting to RAF Leuchars in Fife where he met and married Doreen in 1966.  The wedding immediately preceded a 3-year posting to Kuala Lumpar in Malaysia, where Karen was born in 1967.  Around 1970 or '71 Norris left the RAF and worked for a while as a refrigeration engineer in Glenrothes, Fife, before returning North to work as an operations engineer with Baxters of Fochabers.  Sadly, Norris died in 2009 shortly before reaching his 66th birthday.

Gordon, too, was born at Montgrew.  On leaving school, Gordon worked as a farm hand with his father at Mains of Alves and then Seafield near Forres, before taking up work with the North of Scotland Hydro Electric Board at the age of 19 as a linesman engineer on electricity supply lines across the length and breadth of Scotland.  That life change decision coincided with marriage to Isabella (a.k.a. Isobel) and subsequent parenting of 2 boys and a girl - Gordon Jnr., David, and Jill.  Gordon remained with the Hydro Board for the rest of his pre-retirement working days.  He died in May 2022 a few days before his 78th birthday.

Brian was born at North Bogbain and, like his 3 older brothers, did farm work as a boy until leaving school and taking employment in the hardware store in Forres (called Pat Cruickshank's).  When the family moved to Elgin Brian took work at McCormick's Hardware in Elgin.  He also had a calling for armed forces and joined the Army at a young age, enlisting on two separate occasions.  The first period of Army service saw Brian achieve the award for 'best recruit' of his intake at the age of 16 - he had been an army cadet at school and to some extent knew the ropes and what to expect.  The second enlistment for Brian was to the Gordon Highlanders in which he served more than one tour of duty in Northern Ireland during what was known as 'the troubles' which, effectively, was civil war policed by UK armed forces.  He was then posted to a more sedate life for 3 years in Singapore.  On finally leaving the army Brian eventually married in 1980 to Margaret Cowie (a.k.a. Berry) from Buckie, but the marriage was not to be long lasting and they formally divorced in 1998.  He could turn his hand to many trades as a result of hopping between jobs, and after a period of sustained unemployment he came to Glasgow . He died approaching his 55th Birthday.   Brian made many friends during his life.

Bill was the last to be born at North Bogbain.  On leaving school aged 16 he went on to have two separate careers, first in Science (Meteorology) and then Technology (Business Information Computer Systems Development), both of which as the author of this website are or will be covered in some detail on his own dedicated page.  He married Karen in 1990 after meeting at The Queen's College in Glasgow in 1988 where they both worked at the time.  They now live happily retired in Kirkliston to the West of Edinburgh.

Alison was born at Raigmore hospital in Inverness when the family lived near Alves in Morayshire.  Like many of her father's sisters from Montgrew, she entered Nursing on leaving school and eventually reached the position of Nursing Manager at Aberdeen Royal Infirmary after a spell as Operating Theatre Sister and a break to have family.  She is now semi-retired but still involved in part-time project work at the hospital, and lives with husband John Forrest in Milltimber, Aberdeen, in close proximity to the new Aberdeen Western bypass road after many years in the city centre.  Alison and John have two daughters, Kirsty and Jane, and several grandchildren.

Hint: If this chart is difficult to read, try 'save as' to download it to your machine then view in whatever you use to view photos.  Opening in a new windows browser tab might save time and be sufficient to see the detail.

This photo was taken at the Covid-delayed wedding celebration of Alison's youngest, Jane Forrest, who married David (a.k.a. Spaver) Scott in 2020.  The event took place at the Thainstone House Hotel in Inverurie. 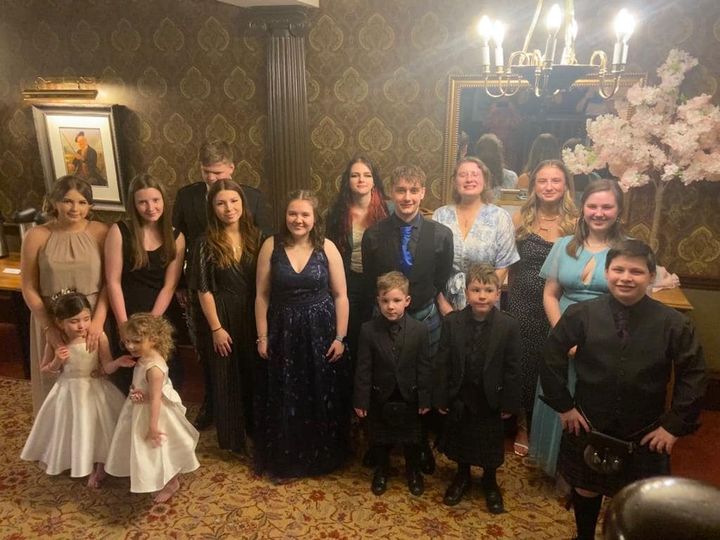