They lived at 10 North Street Elgin, then moved to Paisley before 1917 where Lilian, their second daughter, was born.  Lilian is pictured in the McKay reunion group photo on this website.

Robert Mitchell died aged 80 in Johnstone (near Paisley), as did Isabella McKay the year before, also aged 80.  Robert had worked as a psychiatric nurse at Riccartsbar Hospital Paisley. 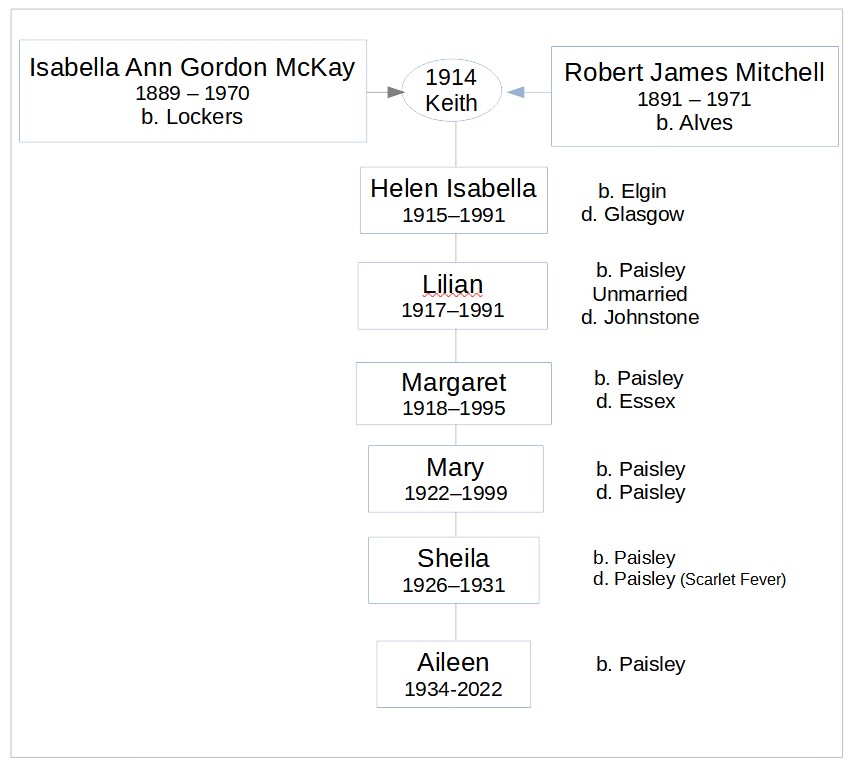 Click HERE for a chart of children and grandchildren for Bella and Robert.  NB: Depending on the machine you use to click the link you may have to right-click and open in a new tab or window to be able to expand and scroll the chart.

Raymond (Ray) Wilkins who lives in Victoria, Melbourne, Australia, has been in touch with some helpful details on the above.  Ray is the son of Margaret Mitchell and William Wilkins.

Helen had four known children, but contact with the rest of the family was lost so few details are available.   She married Angus MacDonald and their children were Morag, Ishbel, Fiona and Robin.

Lilian never married – she is pictured within the McKay family group taken in the 1976 re-union held in Aberdeen.

When Margaret was born the family lived in Riccartsbar Cottages which were property of the hospital in Paisley.   Ray told me “Mum met my Dad (William Wilkins) at Maryhill barracks in Glasgow and they were married in June 1946 in Paisley.

They moved to Essex (Dad’s parents lived in East London so not far away) and set up home and I was born there in 1948.

As a family we often made the train journey to Elderslie and spent holidays with the Mitchell’s and it was always a very happy time for me spending time with my Scottish family.”   Ray has two children and one grandchild and lives in Melbourne.  His brother Gordon also has two children but no further details are currently available.

Mary had only one daughter with husband John Kennedy, Sheila, who sadly passed away in early 2019, having endured early onset Alzheimers.  Mary had two granddaughters, Caitlin and Eilidh.

Aileen is a surviving 94-year-old (as of 2019) and lives in Paisley.  She had two daughters to husband James Cowie, one named Gillian who sadly passed away aged 52 from a brain cancer, and the other Elaine who has two boys.  Gillian had one son, Steven Davidson, and a grandson, Clarke.