Frank (Francis Morrison) married on 16th Feb. 1918 in St. Margaret’s RC Church in Huntly to Helen Whannell of 71 Loch Street, Aberdeen.  He was serving with the 6th Gordon Highlanders.  His place of residence on the marriage certificate is registered as the “British Expeditionary Force, France”.

This picture of Frank is thought to have been taken in his late twenties, and before WW1.

Helen’s parents were Hugh Whannell (occ. Wool Sorter), and Helen Whannell nee MacDonald.  Her death was notified by a son whose given address is 193 Liverpool Street, London W1 (Geordie? – to be confirmed).

Frank survived the war to be killed, tragically, in an accident involving a train.  At the time of his death in 1936 it is thought the family had been living either in Drumblade, Banffshire, or at 18 Christie Crescent, Huntly.  Sadly, Frank was found on the LNER railway line near Drumblade (Greenhaugh farm) at about 9am on the last day of November 1936 having died from serious head injuries and legs severed as a result of accidentally being run over by a train.  He was certified as unemployed at his time of death, but had previously been working variously as a farm servant, postman, and general labourer before and after WW1.  A subsequent correction to the death certificate has the words “labourer, unemployed” struck out.

His children Alex and Ella (Isabella Ann) organised the 1976 McKay gathering as a result of meeting up in Aberdeen whilst Alex was in the Northeast on holiday from Australia where he had lived for many years.

Frank and Helen’s family are shown below. Research is still ongoing, so not a complete story yet.

The other names below came from a conversation with John McKay of Forres some time ago, with more recently updated information (2019/20) from John’s brother, Alf, who lives in Weston Super Mare. 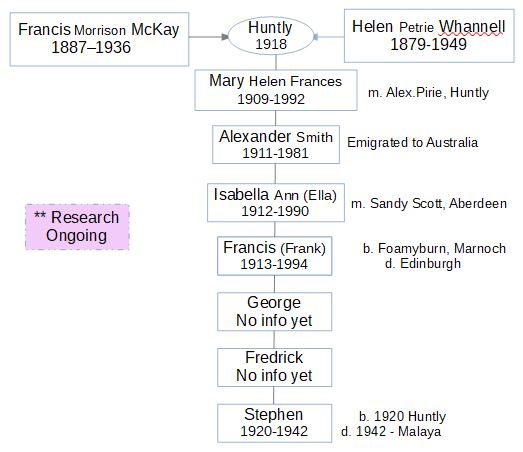 Helen had previously been married to a William Petrie (in Glasgow) and was widowed before marrying Frank.  They had had a daughter in 1906 named Mary Milne Petrie.   There was earlier child to Helen named Hugh Dykes Whannell born in 1904 with no named father.

Some of the McKay children were born with surname either Whannell or McKay but with named father as Frank before they married in 1918 (so technically illegitimate to use the old parlance).

Mary Helen Frances McKay was born at Roseneath Cottage, Bogie St.,Huntly.  She was resident at 36 Old St., Huntly at the time of her death.  Mary’s husband was Alexander Pirie (1907-1979).  Click here to go to Mary’s page for more information.

Alexander Smith McKay was born at 28 Castle St., Huntly.  He emigrated to Australia and married Elizabeth Strachan Walker (born 1908).  They had three daughters;

Isabella (Ella) Ann McKay was born in 1912 at 28 Castle St., Huntly, but no doubt due to a combination of her father being away during the Great War and not marrying her mother until 1918, was brought up by grandmother Mary McKay at Lockers Croft and at Hill Street, Newmill.  Ella was a domestic servant.  This is to be confirmed, but Ella may have had a son named Jimmy Mitchell (1934-1998), and possibly in Boharm.  He was brought up at Lockers/Newmill until 1944 when Mary died, after which Ella continued raising the ten year old.

The author remembers meeting Ella on a couple of occasions when visiting her in the ‘old Aberdeen’ area of the city at 17 Roslin St. with his father in the early 1970’s, by which time she was widowed and becoming ‘elderly’ as far as this young teenager was concerned (she would have been aged about 60).  At her death in 1990 she is registered as resident in Peterculter,

Francis McKay junior a.k.a. Frank died in 1994 in Edinburgh at the age of 81, at the address given as 470 Gilmerton Road in the South of the city (Erskine Care Home for Veterans) .  He had been a commissioned officer (Captain) in the Black Watch regiment, commissioned from the rank of Corporal in the Gordon Highlanders but had lived with his daughter Elizabeth and her husband Robert Tulloch for many years before that.  A page has been dedicated to Frank Jnr – click here to go to it.

Stephen McKay was a fatal casualty of WW2,  confirmed on learning that Frank McKay Jnr. interrupted a journey to Australia to visit brother Alex by stopping in Singapore to visit Stephen’s grave.  Stephen was killed in Malaya in 1942 as a military policeman on a motorcycle patrol.  He is noted as having a home address of 36 Old Street, Huntly, which in fact is where his sister Mary and brother-in-law Alex Pirie had lived and was the address of Mary at her death in 1992.  There is a record of Stephen McKay Petrie born to Helen Petrie (m.s. Whannell) in Foamyburn, Marnoch (as was brother Frank) but with father unidentified (although highly likely and therefore now accepted as Frank).

There is so far no record of Frederick (Fred) or George (Geordie) McKay, further research has been hindered by the Corona Virus outbreak of 2020.

On Helen’s death certificate the informant is named as a son said to be resident in London W1 (Liverpool Street) at the time.  The first name of the informant of her death is unclear but could be George (see below).