Up To Father, George McKay

Boxes with shaded backgrounds have links to other pages.  Click on a box to go to the linked page. 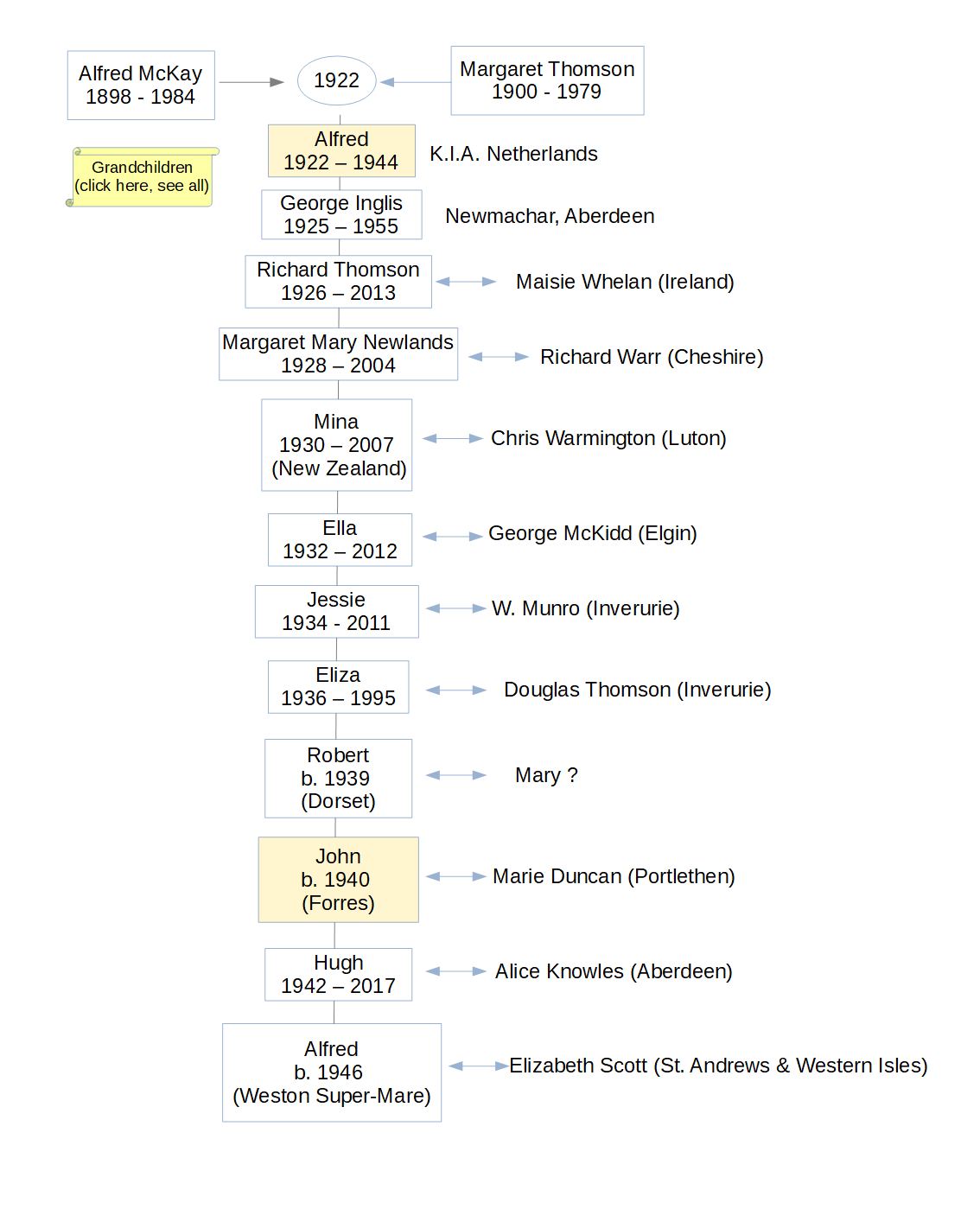 Alfred’s family members do not all have individual pages allocated on this website, so short biographies (where available) are included here below to help the reader know a little more about who they are or were.  Grandchildren may be included within separate family lines.

Disclaimer: The information here is correct as understood by the author at June 2019.  If any of it seems incorrect or otherwise needs amendment please contact me, Bill McKay, via the form on the website Contact page (or directly by email if you happen to know my email address).  I will be more than happy to make changes requested.

Born 16 Jul 1946 at Upper Borlum Knockando, in 1957 the family moved to Muirside Portlethen where he attended Mackie Academy, Stonehaven.

In 1962 Alfred joined the RAF as a Radar Apprentice.  With several RAF postings including overseas in Lybia & Germany, he left the RAF in 2001.

Alfred and his wife Elizabeth married in 1971.  They have 4 children, Shane, Petra, Blair & Serena, and are both retired to Weston Super Mare.

Elizabeth McKay (nee Scott) moved with her family from Ardintinny near Dunoon to St Andrews where she met and married Alfred who was stationed at RAF Leuchars. She had a successful career as a maternity nanny.

Ella Gordon McKay (usually known as Helen) was born at Lockers in the district of Keith, and by 1939 lived at Upper Borlum, Knockando.  She married George McKidd (1936-2006) in Elgin, in 1955.  George became a career RAF man (armourer) stationed at RAF Kinloss after starting working life as a plumber, and after several postings they settled in Elgin.  They had two girls, Angela and Sheila.  More on them when it becomes available.  They are pictured on the McKays Group Photos page.  Ella died in Elgin in 2012.

For the starstruck amongst us, George had a nephew through brother Neil, called Kevin Robert McKidd who was born in Elgin in 1973.  Kevin has gone on to become a globally known film and TV actor in the likes of film Trainspotting and TV series Grey’s Anatomy.