George McKay has the distinction of being the only member of the McKay family to have lived his entire life at Lockers, Newmill, Banffshire, a holding of approximately 15 acres. Born there on 12th October 1862, the second son and youngest child of Peter McKay and Isabella Clark, he remained there until his death (also at Lockers) on 2nd May 1915, from Cystitis Pyelitis.

In the 1871 census George is listed along with his parents and older sister and brother – Marjory born 1859 and William born in 1860, but by the 1881 census his mother was the head of the family, his father having died in 1879 and his brother William previously left home for Forres. On 14th January 1882 George married Mary Newlands and they reared their numerous progeny at Lockers, his mother living with them until her death in 1894. After he himself died in 1915 his widow carried on at Lockers until the early 1920’s when she moved to the village of Newmill.

Until comparatively recent times many small farmers and crofters could not rely solely on agriculture for their livelihood and were often engaged in other activities as well, frequently leaving the various family members to carry on the cultivation of the land in their absence. These individuals thus provided the sort of essential services without which a rural community would founder i.e. that of the smith, the wright, the molecatcher, to name but a few. George McKay was one such farmer, in his case the subsidiary occupation being that of cattle and horse dealer – a vital role in an agricultural society. He travelled far afield in this pursuit and is known to have gone as far North as Sutherland in search of suitable beasts. The usual practice was for the animals to be brought down over the ancient system of drove roads to be sold at trysts and fairs all over the country. One of the biggest of these was at Akey Brae in Buchan which was one of the few fairs to be attended by English buyers. In general the cattle side of the business was in decline by the last quarter of the 19th century and the trading at these fairs became mainly in horses. George McKay seems to have followed this trend as we are told that he originally dealt in cattle but latterly was known as a horse dealer.

Mouse-over the name boxes in George’s tree to see which have links to other pages or documents enabled.  In general, shaded boxes have associated pages linked – click on them to navigate as required. 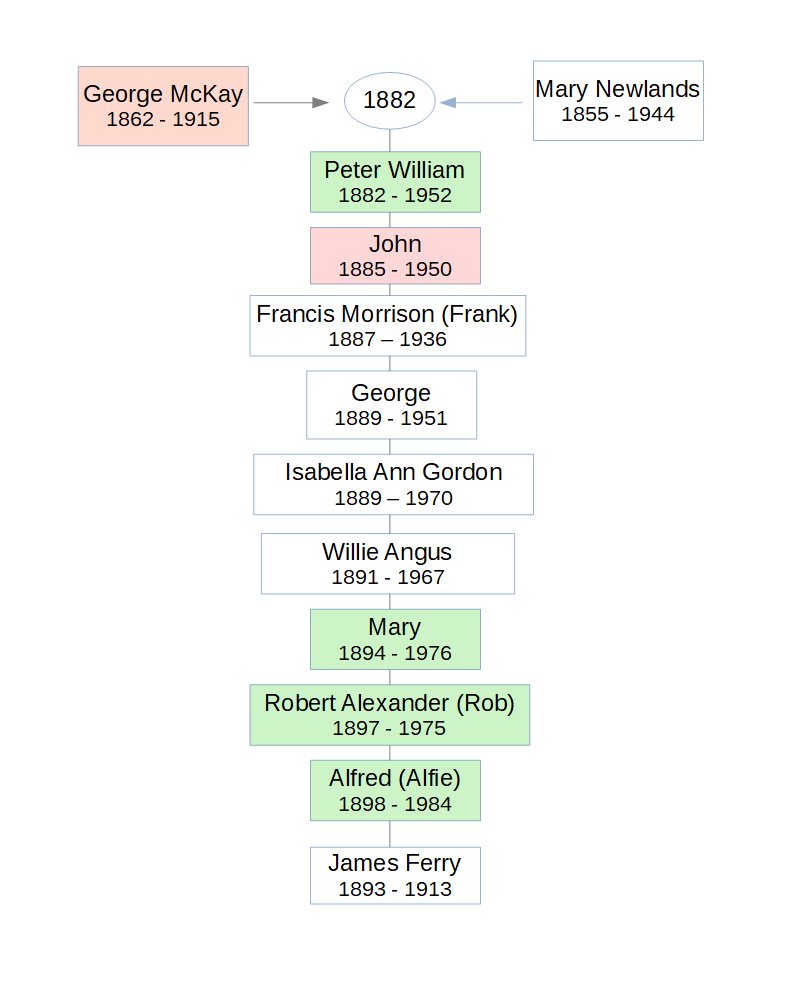 At the time of her birth Mary’s father James was a County Police Officer, although he subsequently became a shoemaker.  The family returned to the father’s home village of Botriphnie in Banffshire not too long afterwards.  In 1881 Mary was living at the farm of Followsters outside Newmill, next to Lockers croft.  On 14th January 1882 Mary married George from Lockers.  He was her junior by seven years.

For the first twelve years of married life Mary shared the house of Lockers with her widowed mother-in-law.  It is interesting to note that when one of her own sons (Robert) brought his new bride home to Lockers forty years later, she herself moved out and left them to their own devices.

After George’s death in 1915 Mary took over the reins at Lockers as she had done during his working absences from home in earlier years.  On the marriage of her son Robert (who eventually emigrated to Canada in 1926) she moved into Newmill until her death in 1944.  A newspaper cutting of her obituary can be seen at the foot of this page.

Mary had many brothers and sisters, one of whom was Elisabeth Newlands who married James Gray of Keith.  One of their descendants was Hebbie Gray who became a well known musician (a fiddler like his older cousin Roger) and music teacher around Banffshire and Morayshire.  Hebbie and his wife Shona Ross maintained the Roman Catholic faith and married at the RC chapel in Keith in 1959.

Virtually nothing remains of the original building apart from crumbling walls and gable end with chimney (see below).   Followsters farm is where Mary (Newlands) McKay lived with her family before marrying George.

Peter married Isabella Robertson.  At the time of Peter’s death they lived at 18 South Street, in the village of Newmill to the South of Lockers.  He was a ‘General Carter’ transporting goods and people to their target destinations by horse-drawn vehicles including sleds in the winter when necessary.  Most likely to have been farming related activity.  Heart disease, death registered by son-in-law Gordon Geddes, also of Newmill.

John was a farm worker at the start of his working life.  There was a suggestion (sources unverified)  that he might have been involved in milk and coal deliveries around the towns of Keith and Newmill.   He worked at Montgrew farm as a farm hand until eventually marrying the Farmer’s stepdaughter (Ida Masson) and taking over the running of the farm with Ida after her stepfather died in the 1900’s (James Robb, married to Annabella Masson, Ida’s mother).   There is a page (click here) dedicated to John, the author’s grandfather, on this website.

Frank was killed in an accident involving a train at Keith.  His children Alex and Ella organised the 1976 McKay gathering as a result of meeting up in Aberdeen whilst Alex was in the Northeast on holiday from Australia where he had lived for many years.  Ella was brought up at Lockers although at the time of his death it is thought Frank’s family lived in Drumblade, Banffshire.

Frank married Helen Whannell and their children comprised of Mary, Alex, Ella, Frank, Geordie, Fred, and Stephen.  There is a web page dedicated to Frank which expands on his story – click here.

George the younger remained single and had no children recorded.  He had been a police constable and, it was said, worked for the police force in Shanghai, China, for some considerable time.  At the time of death, from Cardiovascular degeneration, his ‘usual place of residence’ was registered as North Bogbain farm, Keith.  Norris (Roger) was farming North Bogbain and notified the registrar of the death, accordingly.

Isabella was born at Lockers in June 1889.  She married Robert James Mitchell (born in Alves) whose registered address was 15 Murdoch’s Wynd, Elgin when they married in 1914.   They had 5 (perhaps 6) children and lived most of their lives in or around Paisley, Renfrewshire from about 1916 onwards.  Robert was a male nurse in Paisley.

No birth or death records were found initially due to searching under the name William.  Birth and death records were then discovered under the registered name of Willie, however he is alternately named as William on documents other than birth and death certificates.  He married in 1922 under the name of William to Agnes Russell Beattie in Cambusnethan which is in Wishaw, North Lanarkshire, and died in nearby Carluke aged 76 (20 miles or so SouthEast of Glasgow).

James died young from Tuberculosis at the age of twenty.  He was an apprentice Saddler in Keith or Newmill, and his death was registered by his father, George.

Became Mary Smart when married to Robert Smart from Aberdeen.  Mary can be seen in the group photograph taken at the first of the most recent McKay gatherings in Aberdeen, 1976 (see ‘Group Photos’ on this website).  Her grandchildren can be seen at a young age in the same photograph, for sure Linda Smith (maiden surname Findlay, great granddaughter to Mary), married to George Smith and currently living in Peterhead.  Lind’s brother Stuart Findlay is also in the picture.

Robert emigrated to Canada with his wife and young family in the late 1920’s (around year ’26 or ’28).  Known to my father Roger as ‘Uncle Rob’ he visited us, alone, in the 1960’s for a night or two and was ferried between relatives by Roger, but he also spent time with his brother Alfred in Knockando.  Pretty sure according to the author’s memory Robert came to the UK by sea from Canada for that visit on the cruise ship ‘RMS Queen Mary’, the author remembers a postcard showing a picture of the ship being left for us to treasure.  Considering the liner was decommissioned in 1967 he must have been one of the last of her passengers.

Robert also left a picture postcard showing his ranch at the time (the card has long since disappeared), having been photographed from the air, perhaps from a business  or government marketing regime (the website author’s conjecture) ongoing at the time.  Robert’s granddaughter Robin has provided a wealth of material on the Canadian McKays descended from Robert.

Gladys Eyres, a daughter of Robert’s is pictured in the 1976 group photograph already mentioned.  She and her husband Gordon Eyres were on a first visit to the Northeast, perhaps specifically for the event.

Alfred farmed in Knockando for many years and had a large family with not one but two sons also named Alfred.  The elder Albert was killed in action during WWII in his twenties.  There is a dedicated page on this website for Alfred (known as uncle Alfie to Roger) to contain more information when it has been collated and finalised.  His son John McKay who lives in Forres supplied much of the available information.

World or National Events of 1862

This newspaper cutting was contributed by Linda Smith, great great granddaughter of George and Mary.

A few items of information below which might add a flavour of George’s character and /or the time he lived in.

In the prime of youth many of us are given to ‘pushing the envelope’, demonstrating behaviours and opinionated thoughts sometimes, mercifully, left behind as we mature.  This item comes from the Banffshire Advertiser newspaper of 1887 when George would have been aged 25.  George along with a James Smith were charged with breach of the peace but found not guilty.  Smoke, but no fire.

In 1891 a house was purchased in Hill Street, Newmill, evidenced by this newspaper cutting.  There are recorded births of McKays at 51 Hill Street, and Mary McKay herself lived there until her death in 1944.  It basically says “Hill Street knocked out to Mr McKay for £141″. 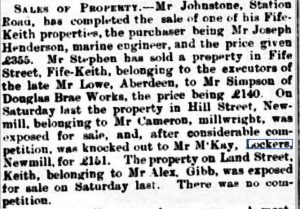 Two years after the Hill Street purchase, in 1893, there is evidence of Bankruptcy for George McKay.  Perhaps he had extended himself a little too far financially for a while.  The first item (click here to view) is from Moray Council archives in Elgin, thought to be housed there due to the reference in it to his death notice in the ‘Courant’ newspaper of the time (1915) which was fully titled the ‘Moray Banff and Nairn Courant’.

The second item is another Banffshire Advertiser newspaper clipping, this from 1893 which roughly says of George, “assets £81, liabilities £181, deficiency almost £100” …

In the year 1905 a Land and Property Valuation Roll which includes Lockers (and, interestingly, the Braes of Montgrew) records Mary McKay as the tenant of Lockers Croft on her ‘own account’, not George.  Click here to view, but depending on the device you are using to view you might find it better to either right-click then open in new window, or right-click the link and save to a drive to open independently of your browser.

It is very likely the result, or perhaps condition, of Bankruptcy proceedings that George not be the named tenant.  However it is also possible that the croft tenancy and George’s activities generating income as cattle and horse trader were kept separate.  We don’t know for sure.

A Glen of Newmill contemporary of George, also with Glenlivet parentage

In researching George’s family it was of interest to find a birth certificate of a Francis McKay born in Newmill in 1855.  His father was Alexander McKay of Inveravon, Glenlivet, and his mother was Janet (nee Littlejohn) also of Glenlivet.  Francis was Janet’s first child, she was aged 21 at the time of his birth.  A direct family connection with George has not yet been identified, something to look at in the future, perhaps.  Francis died in Keith in 1941.