Born 4th November 1815 at Tomoriough, Clashnore, Glenlivet, Peter McKay (also known as Patrick) was the second and oldest surviving son of William McKay and his wife Marjory Stuart. He was also the last in his particular line of McKays to have been born in Glenlivet. The sponsors at his baptism were his aunt, Margaret Stuart of Eskemore, and John Grant of Delhandy.

In 1841 Peter was living at Achnarrow, Glenlivet, with his parents and younger brother and sister, William born c1822 and Jane born c1825. Around 1845 the family left The Braes of Glenlivet and settled at Lockers, in the Aultmore district of Banffshire, where they built a house and cultivated approximately 15 acres of land. In the 1851 census Peter is still unmarried and living with his parents and sister but there is no mention (then or subsequently) of brother William.

Family tradition has it that Peter was crippled in some way but whether this is a congenital malformation or the result of an accident is not known. At any rate it is said that a marriage was eventually ‘arranged’ for him by some friends who had set off over the hills to Enzie to look for a suitable bride (and incidentally falling in a bog en route, which for some obscure reason was considered to be a good omen). On 2nd May 1857 Peter was duly married to Isabella Clark of Ryeriggs, Enzie; neither bride nor groom being in the first flush of youth, he being 41 and she 36.

By this time Peter’s mother had died and the newly married couple lived at Lockers with his father and sister. Sister Jane died unmarried in 1859 of consumption and this was followed by the death of Peter’s father in 1863. Thereafter the household consisted of Peter and Isabella, their three children (Marjory born 1859, William born 1860, and George born 1862) and Isabella’s previous daughter, Isabella Cameron born 1851.  Click here for an official record of the crofts at Lockers (on land owned by the Earl of Fife as was so much of the surrounding land) – there were three crofts, only one of which was tenanted by Peter McKay at the time of the record, the others being a James Mitchell and a John McConnachie.

Peter died on 6th September 1879 aged 61 and was succeeded by his widow and younger son George; the elder son William had left home and was by that time living at the Railway Station, Forres. William, who latterly lived in Coatbridge, Lanarkshire, died in Glasgow on 7th March 1906 as the result of a railway accident.

Mouse-over the highlighted names below for links to downstream tree(s). 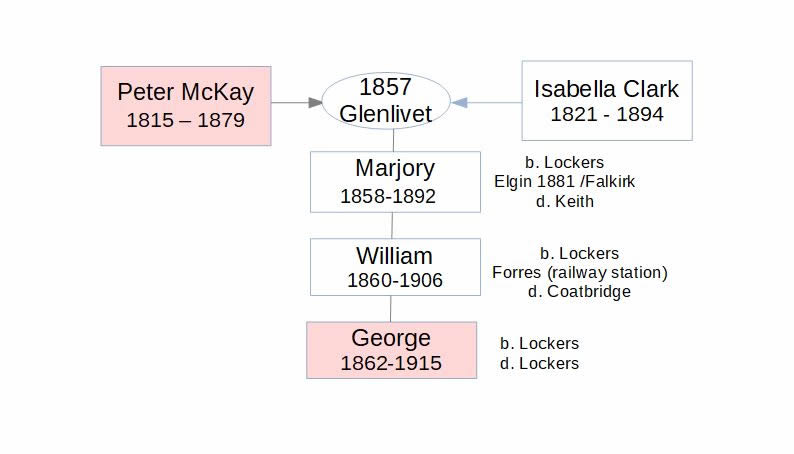 Born at Enzie (pronounced ‘Ingy’) in the parish of Bellie, Banffshire, Isabella was one of several children of James Clark and Janet Chapman.  Little is known of her early years although she does seem to have lived around Enzie until her marriage to Peter.

The extract below from Catholic records 1857 reads as follows: “On the second day of May eighteen hundred and fifty seven after due proclamation of the bans and no objection offered, Peter McKay of the parish of Keith and Isabella Clark of the parish of Enzie were married by me in presence of William McKay, George Inglis and many others.  Charles Tochette.”

Isabella had had a daughter previously, Isabella Cameron, who’s father was a John Cameron.  Young Isabella (Peter’s stepdaughter) was however baptised as a Roman Catholic, the priest noting in the baptismal record that both parents were Protestant, and was brought up at Lockers with the rest of the family after Isabella and Peter married.  She subsequently married and had a son, William Angus, who was born at Marnoch in 1873.  Her husband is said to have been a gamekeeper at Orton.

Peter died in 1879, Isabella in 1894.   The financial health of the Lockers concern is indicated by the contents of these historic documents recording the estate of Isabella, Peter’s wife, at the time of her death.  They present a picture of meagre worth (at least on visible paper), however that picture had not improved by 1915 i.e. by the time of the death of son George it had in fact reduced.  To put the figures into context roughly, the weekly wage income of an agricultural labourer in the year 1894 was £0 13s 8d (in old GBP Sterling, which equates to about £0.68 Sterling in today’s money – i.e. less than £1 per week).  These figures are from the UK Dept of Employment and Productivity statistics of 1981 for the year 1894 so just provided here as a relative yardstick, the reader should bear that in mind  – items highlighted thus are inserted by the author;

The document at the centre of the three presented below is signed by “W McKay”, presumed to be the son William, who died accidentally in 1906 in Coatbridge aged 46. 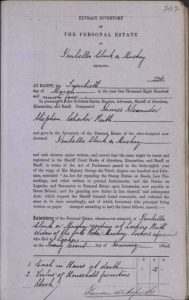 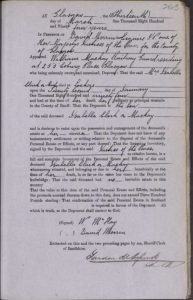 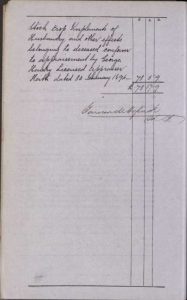 Relative Cost of Living figures from 1906 (for comparison) – items highlighted thus are inserted by the author;

Born at Lockers, Marjory lived in Elgin from 1881 but subsequently moved to Falkirk, where she married a James Ferry, an Irishman, in 1887.  They had a daughter, Bridget Ferry, who unfortunately lived only from 1888-1891.  It seems that Marjory returned to Banffshire and died in Keith, 1892.

James Ferry was baptised in Islandeady, Co. Mayo, in the west of Ireland 1852.  He was a carter.  He and Marjory (who was resident in Haddington at the time) married in St. Francis Xavier Catholic Church in Falkirk, and they lived at 6 Leslie Place.  It is not known if James moved to Keith when Marjory returned, but it is interesting to note that her brother George McKay of Lockers named a son, born in 1893, as James Ferry McKay, perhaps a tribute in some way to Marjory who died the previous year in Keith.  There is no recorded death in Scotland for James Ferry.

The above page content is derived from copies of documents in family possession, originals location currently uncertain.  Facts uncontested to date.