The relevant entry in this baptismal record 1745, same year as the Battle of Culloden to put it into historical context, reads as follows….  “February 1st, Peter son to Don(ald) McKay in Clashnoir was baptized”.

Peter is elsewhere recorded as being born in 1742 so perhaps the baptism was just put off.  Peter’s family and children are discussed further down this page.

In Buitternach Cemetery which sits on a hill close to Chapeltown of Glenlivet, Peter McKay’s gravestone records his own death along with his wife Elizabeth, his father Donald and mother Jane, as well as others in the family.  The inscription is weather-worn but some detail can be read, as follows, with asterisks representing illegible lettering:-

Here lie the mortal remains of

pray for the souls of

Linda Smith (of Peterhead), our cousin who descends from George via Mary McKay from Lockers, has contributed the interesting information below about a previously unknown son of Peter McKay, James, who entered the Priesthood in Spain via a seminary near Aberdeen.  So Peter it seems had at least four children with his wife Elizabeth Tom (or Thom, or Tam depending on sources).  There is William (1788-1863) mentioned above, Robert (1791-1888), Jane (d.1806), John (d.1812), and now a fifth, James (1802-1884).

William left Glenlivet around 1845 with his family to setup in the Newmill area near Keith, took the croft at Lockers and built the house where the next two generations would be brought up.  He was the father of George McKay from whom the majority branches of McKays documented in this website have spread.

Robert was a farmer who stayed in Glenlivet (as opposed to leaving as older brother William had done).  In 1820 he married Elizabeth Rattary at Kennykyle, Glenlivet (mother : 1771-1859 Helen Grant, father: 1772-1839 John Rattary). They were second cousins.

Children of Robert and Elizabeth

The Glenlivet area was instrumental in preserving Roman Catholicism in Scotland.  The seminary in Scanlan near Clashnore and to the SouthEast of Chapeltown was setup in secret to train students for priesthood in the 18th century, which was a time when it was illegal to be openly Catholic in faith.  It was outlawed in 1560 by the Scottish government of the time and the consequences of discovery were severe.  Priests were trained in Europe.  The Catholic Ambrosian Society has historic records of students who trained to be priests.  Not all were successful and ordained as priests.  Many failed, many succeeded, and one such who succeeded was James McKay, son of Peter McKay.  The following information came from The Ambrosian Society website records of student candidates, comments in italicised brackets are from this website author.

Born at Nether Clashnore, Glenlivet, 25th March 1802/03, the son of Peter McKay and Elizabeth Tam; arrived in Valladolid (Spain, in 1826) from Aquhorties (seminary near Inverurie, Aberdeenshire); ordained a priest in Zamora (Spain, in 1829) and left for Scotland, 11th May 1829; after nearly forty years on the Scottish mission, went, 1863, to St. Bernard’s Abbey, Leicester, where he died, 19th April 1884.

The story is not wholly straightforward however and will require some further research.  On Peter McKay’s gravestone, it shows his wife Elizabeth Tom buried with him in 1804 but no record of her age at death.  Peter lived 1742-1837 so would have been aged 60 when the above James was born, if the record is correct.  Son William was born in 1788.  Unless Elizabeth was more or less a child and very much younger than Peter when William was born, it is hard to reconcile their having a child in 1802 when Elizabeth might have been too old to do so.

Conjecture: James the priest may have been from a missing generation with coincidentally similar names of parents, or his parentage (as evidenced above) may have simply been ‘parentage of convenience’ or ‘sponsorship’ to allow him to embark on training for priesthood.  There isn’t yet a birth record to confirm parentage.

Many older historic records from Glenlivet were deliberately destroyed to avoid detection by government Hanoverian troops (the battle at Culloden and the highland clearances were significant events of that historic period).  Those which survived are likely to be in the Scottish Catholic Archives in Edinburgh and the website author intends to make an exploratory visit in 2019.

The family chart for Peter McKay 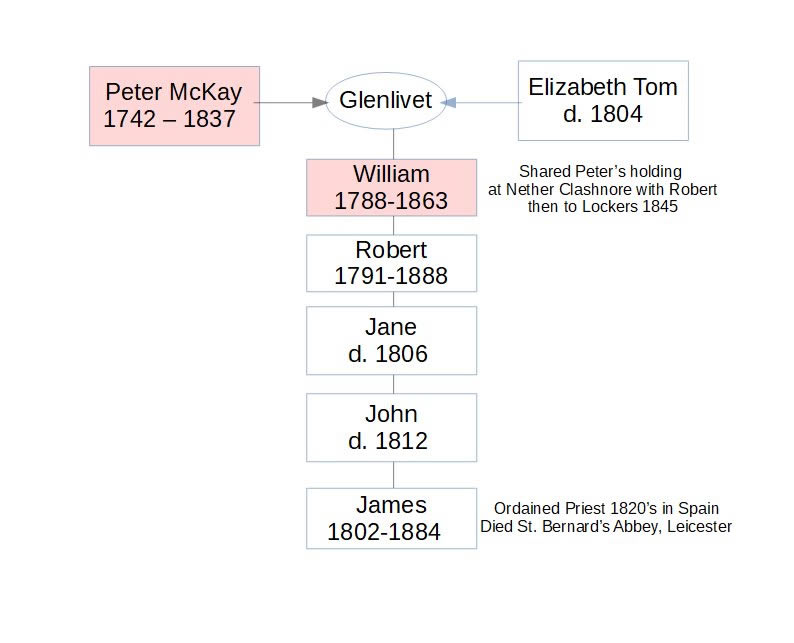