Up to Father, Alexander Coull
Down to Son, William Coull

Alexander was a shoemaker in Aberdeen when he met and married Janet (Jessie) at Shiprow Chapel.  Jessie was the daughter of a ship’s carpenter, John McBeath, in Aberdeen.  The marriage record (click here) spells McBeath as McBeth but different spellings in those days were (and can still be) not unusual in i.d. documents.

They are both documented as the parents of William, great grandfather of the website author and father of Robert Webster Coull.  All children to them identified thus far and shown below (and verified as children of Alex and Janet) were born in Cullen.   William married in Portsoy and died in Marnoch. 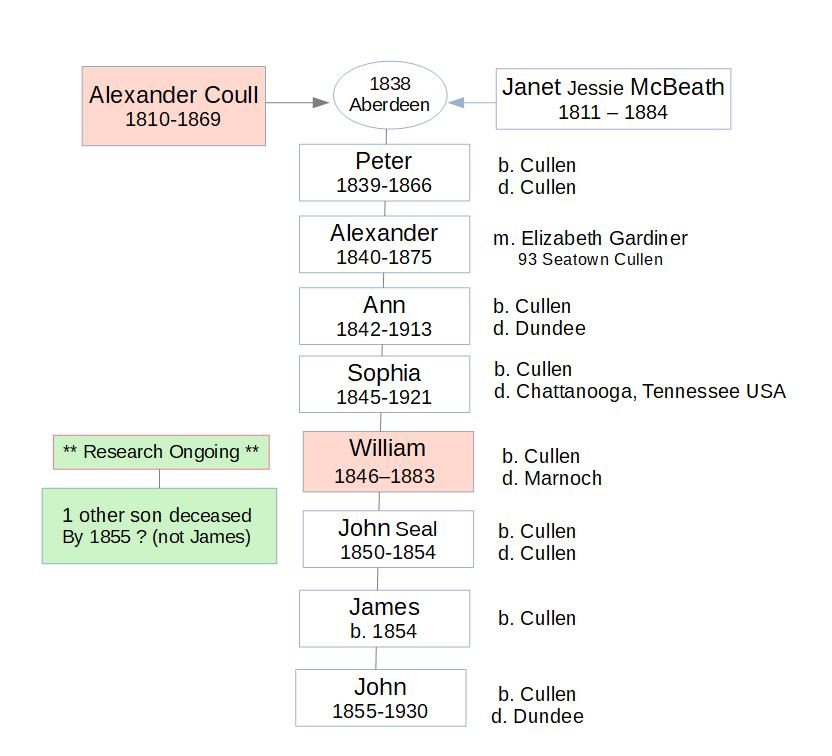 Click here for links into Alexander’s tree.  There are one or more active links in the PDF file presented allowing drilldown to lower levels.  NB: Updates now pending

Alexander Coull senior (b.1810) was the illegitimate son of another Alexander Coull (a mason to trade) and Ann Imlach.  He died of cancer of the tongue, aged 59, at Seafield Street, Cullen on 29th December 1869.  He served in the army in 1831 when he was 20 years old.  Research continues on his parents.

Jessie McBeth (or Janet McBeath) was the daughter of John McBeth as already stated, and of Jane McBeth (m.s. Mitchell) of Aberdeen.  Jessie died in Alexander Street, Dundee.

Their son John (in Dundee) registered both of his parents deaths.

Summary Biographies of children of Alexander and Jessie/Janet

Peter was a shoemaker to trade like his father, and lived and died in Cullen in 1866 at the age of 28 of Bright’s Kidney disease.  He never married and had no children.  He is a recorded witness of sister Sophia’s marriage in Edinburgh, in 1864. 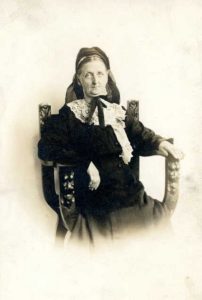 She was a domestic servant, and he was a hotel worker in Edinburgh. They had ten children in 20 years. She died on 4 May 1921 in Chattanooga, Tennessee, USA, at the age of 75, and was buried there.  Her emigration story is one of drama which includes shipwreck in the Caribbean en route to USA, landing at New Orleans and eventually settling in Tennessee.

William married Jessie McQueen and had a large family.  In addition, Anderson twins named Eliza and George are also listed as children, similarly Mary I Wilson as another daughter,making a total of 10.  Research is ongoing regarding the additional children not named as Coull, perhaps adoption will be the finding, or simply error or confusion in non-UK/Scottish genealogy recording.  The record will be put straight as soon as possible.

John Seal Coull died as a child aged about 4 before 1855, in Cullen.

James is a mystery.  After birth and baptism there seems to be no record of him. My guess is he is another emigrant, but so far no proof. 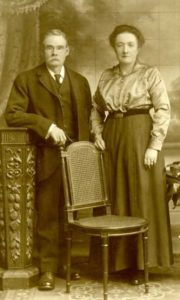 John was the youngest of the family and was born at Seafield Lane Cullen.  He became a tailor to trade in the city of Dundee, where he married Margaret Lowden and together had six children in 18 years.

He maintained correspondence with family throughout many years, most evidenced by letters to sister Sophia and others in Canada and America as they all aged (some copies exist).

His mother Janet also passed away in Dundee having moved there from Cullen following the death of father Alexander.