Before reading on, please note that two additional siblings are mentioned on the Ancestry website, namely Emily (1883-1956) who had no known children, and Williamina b.1880, year of death unknown., also no known children 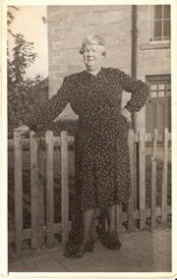 Here is a photo of Emily, taken from the Ancestry website.  Emily and Williamina both lived in Rathven at one time.  Emily is indeed the daughter of a William and Jessie Coull, however on her birth certificate William is shown as a fisherman from Buckie, so not a known relative of our William and Jessie, unless I am mistaken.

Does anyone have more information that would explain why Ancestry shows them as siblings of Robert Webster Coull ?

Click here for links into the wider Coull family tree.  NB: There are one or more active links in the PDF file presented allowing drilldown to lower levels (note though, they may not work if viewing on a mobile phone browser).

Summary Biographies of the children of William and Jessie

Alexander was born in the Northeast, but emigrated to the USA at the age of 20.  There is a page dedicated to Alexander on this website (here) giving more detail, but in summary before moving to Pennsylvania and marrying Isabella Wilson from Northern Ireland in America, he fathered a child with Annie Robertson in Banffshire, born in the year of his emigration, 1889.  The child was named Jessie Coull and she subsequently emigrated to the USA in 1914 (she is listed in the 1901 census taken for Aberchirder – see the entry for Jane, below).

James Coull and wife Jessie (Rettie) Coull had a son named James Coull in 1910 who lived for only 1 day.  They had other children including William John Alexander, born 1911, who lived for only 12 days.  More research will reveal the the others.  Jessie died in 1938, 3 years after the death of James, at 70 North Street, Aberchirder.

William married Helen Morrison in 1901 at Grange near Keith.  There is a page dedicated to William on this website (here) giving more detail (but is work in progress so some forbearance is required regarding accuracy – have a look and you might understand why).

George was unmarried and died at the tender age of about 17 years, with no known wife or children.  He had been a tailor’s apprentice to trade.

It is understood that Robert had gone to America briefly as a young man but, for whatever reason, chose not to make a life there as his brothers did.  He married Christina Watson in 1902 and together produced a large family, one of whom (Elizabeth or Lizzie) was the mother of the website author.  There is a page dedicated to Robert on this website (here) giving more detail.

Charles seems to have an interesting story, so a dedicated page for him is now linked to this one – click here to go there.

As a young man he served in the army overseas, then married Rose Ann Angus in 1912 in Aberdeen. His in-law parents were Alexander Angus, market gardener by trade, and Rose Ann Robertson.  Charles and Rose with 4 children emigrated to Pennsylvania, USA, in February 1921 (on the SS Adriatic sailing from Southampton),  no doubt because brothers William and Alexander had put down roots there a considerable number of years earlier.

Jane married Alexander Clark (farm servant) of Aberdeen in 1900, but is listed in the 1901 census at Marnoch (Aberchirder) alongside widowed mother Jessie, brother James, and niece Jessie Coull (age 11, probably the illegitimate daughter of Alexander who emigrated in the year of her birth, but who herself later emigrated to America in 1914 and settled in Sacramento California) with no mention of Jane’s Alexander in the 1901 census.

The Ancestry website seems to know Jane as Jean (immigrant names often changed at the point of entry as a result of bad or careless handwriting) and lists Robert Webster Coull and Charles Webster Coull as brothers.  Ancestry may be off the mark and this could be a huge coincidence, but there is as yet no evidence to the contrary, and working on the assumption that this is the same person, Jane and Alex must have emigrated, initially to Canada (Toronto) according to Ancestry, and then migrated to Pennsylvania.  In Ontario Canada they had three daughters and two sons … Robert (b. before 1907, 5 children), Helen (1907-1990, 5 children), Alexander Shepherd (1909-1982, 3 children), Jessie (1912-1995, 3 children), and Violet Mae (1918-2003, 2 children).  Alexander died in 1918, and Jane (Jean) remarried to Alexander Robertson.  By 1935 she was living in Norristown Pensylvania, where Alexander died in 1952 and she herself died in 1967, in Royersford, Montgomery, Pennsylvania. 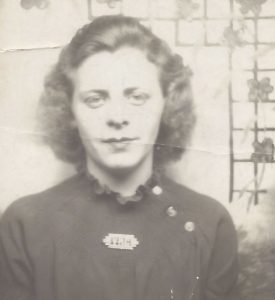 The photograph here was amongst a collection of photos which included American cousins.  The photo is of Violet, a young woman identified by handwriting on the back of it which says “This is my baby Violet”.  Is this Violet Mae Clark, Jane’s daughter who, it seems, never married and died in 2003 ?  (NB: later searches find she may have married 4 times, and had two children).

NB:  No Scottish death record for Jane has been found which lends support to the above being a correct summary of Jane’s life.