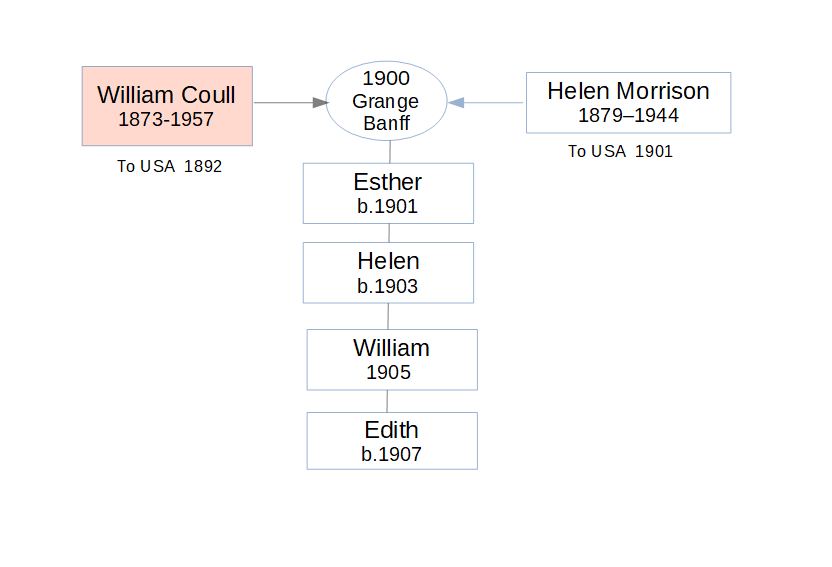 In 1918 at the age of 44, William (a naturalised American since 1898) had USA draft registration papers for WWI service dated 12th September in the city of Philadelphia. It shows him to be medium height and build, and his hair colour was grey.  It’s unlikely he wore a uniform for any length of time.  His occupation is shown as ‘Teamster’.  The name dates back to 1903, when most deliveries were made by horse-drawn wagons. The driver was referred to as a “teamster,” because he was the one who managed the team that was pulling the load.

The Census of 1920 reveals that William emigrated 1892 at the young age of 19 or 20, and became an American citizen in 1898.  Helen emigrated in 1901, according to the census, and was naturalised also in 1898.  But there’s an obvious conundrum here – there is a marriage certificate showing they married at Braco Brae, Grange near Keith in 1900 (Helen’s home), William being a shoemaker at the time.  Until it becomes clearer it is assumed that William returned to Scotland to be married to Helen, however it doesn’t explain how Helen could have been granted USA citizenship in 1898 before emigration ??  Perhaps the census record for Helen is incorrect.

All of their children were born in Philadelphia on or after 1901, which seems to support the year of marriage.  At the time of the 1920 census William’s employment had changed to Salesman in a bottling company, and on his death in 1957 although retired his occupation shows as having been a ‘Guard’ at Independence Hall Philadelphia before retirement.