According to Census of 1861 Patrick (very likely b.1818) was from the town in Ireland called Carndonagh, County Donegal and he married Mary Mackenzie (very likely b.1824) also from Donegal, the town of Moville (maybe an area called Gruncard but not yet confirmed).  They married in Glasgow on May 13th 1844.

At the 1881 census, Mary is shown as head of house, living at 139 Stockwell St and working as a washerwoman.

In 1901 there’s a Mary Lynch living with Elizabeth Marmion, as mother-in-law to head of house, Daniel Marmion.   The marriage of the Patrick Lynch (b. 1861) linked to as the son of the Patrick on this page, to Catherine Gough, was witnessed by Daniel Marmion and Elizabeth Lynch so there begins to be supporting data.  Elizabeth worked as a washerwoman at the time of the 1901 census, and they lived at 43 Lanark St at that time.

Patrick, husband of Mary Mackenzie, and Mary herself were both deceased by the marriage of son Patrick to Catherine Gough.  He had been an umbrella maker.  Patrick and Mary were living at 139 Saltmarket, Glasgow, when he died on 27th December 1861.  Their daughter Mary Lynch registered Patrick’s death, making her mark ‘x’ rather than giving a signature indicating illiteracy which was not uncommon for that period in history. 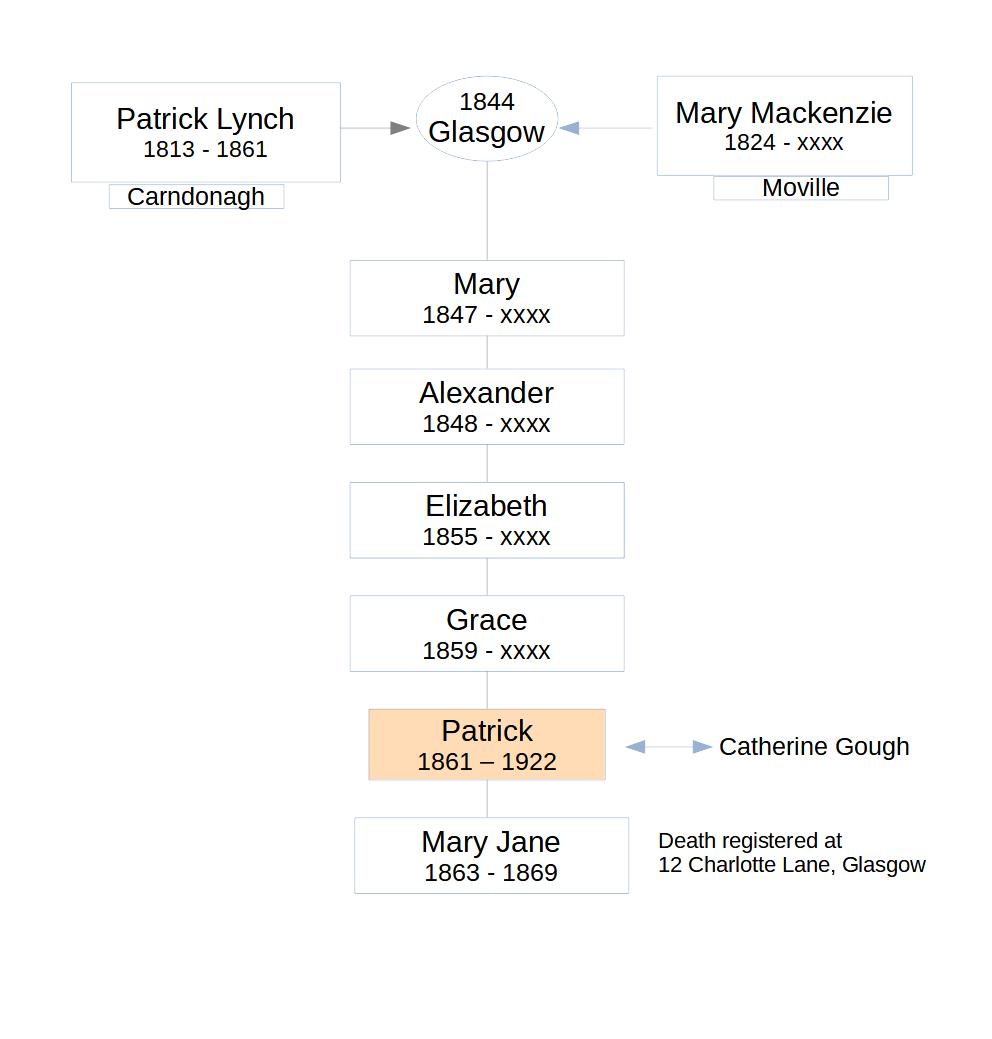 Two apparent discrepancies which the eagle-eyed may have spotted.  There are two daughters named Mary and, whilst not unusual in families where a child born after the death of an older sibling was given the same name, it is perhaps unusual where there is a surviving older sibling of the same name.

The second discrepancy is that Mary Jane seems to have been born well after the death of her father.  Sometimes errors in records do occur perhaps due to careless registrar recording of fact (hence the words ‘very likely’ used at top of page), however Mary Jane’s father is clearly stated to be Patrick, the umbrella maker and her mother as Mary.  Mis-spelling of names (McKenzie rather than Mackenzie for example) can also lead to confusion when searching records.  Correction(s) will be made as and when there is more clarity.