Like several of her sisters before her, Mary entered nursing and worked at the Sick Children’s hospital in Aberdeen after leaving school.  She later married John Mann from Keith who was then serving in the Army.  John was a baker to trade, and resumed that work after being discharged from the Army due to ill-health, and later he also worked as a watch repairer and sometime fruit farmer. 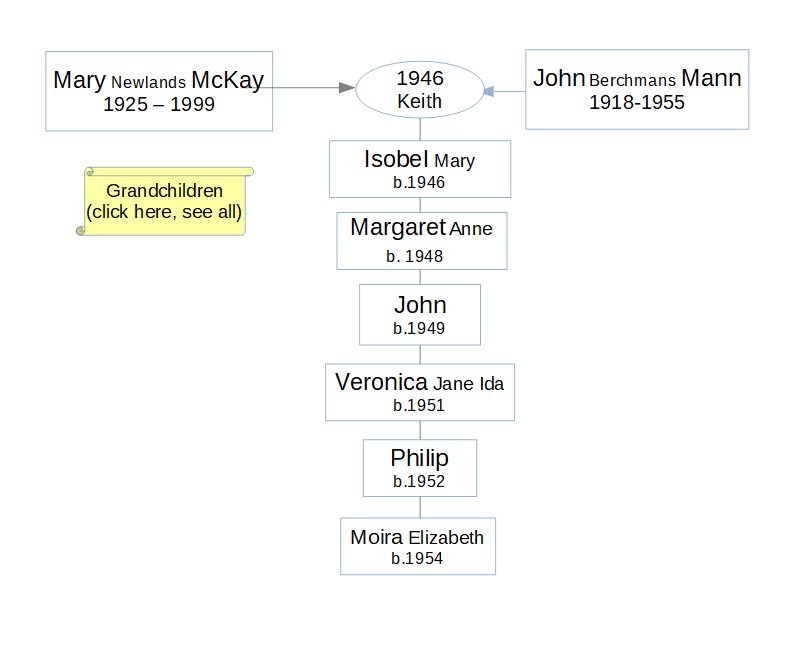 Mrs Mary Mann, nee McKay, of Fraser Place, Keith during the Second World War stayed with her parents, brothers and sisters at Montgrew farm just outside Keith. She well remembers the day her father bought his first tractor. He was showing it to his family when his wife came running down to the field called “Mossie Hollow” where they were all gathered. Mrs McKay was very upset as war had just been declared on Germany. This news must have put quite a damper on Mr McKay’s excitement about his new machine.

Mrs Mann attended Keith Grammar School during the war and because she stayed out in the country has very little memory of how the war affected the town of Keith. She can however remember Earlsmount being used as a hospital during WW1. The school life was changed quite a bit because of the number of evacuees staying in and around Keith. She can remember sometimes only attending school for half a day and other times going every other day. She said that if the siren sounded after 10 pm pupils knew not to attend until after 10 am the next day—- this did not happen very often. At Montgrew they had an evacuee from London called John, who was horrified to see a hen being boiled rather roasted. This led to a bit of teasing about ‘country-life’ v ‘city-life.

Also on the farm they had 2 Italian POWs, Phillipo and Daniello and also a German POW. Because they stayed in camps outwith Keith it was usually well into the morning before they got to Montgrew to start work; Mr McKay naturally was not too happy with this and Mrs Mann was one day sent by her father up to Fife-Keith to ask Mr Robb, the banker, if the POW could stay at the farm. (This would suggest that Mr Robb had something to do with allocation of POW) It was decided that they could stay at the farm as they had a room with a lock on the outside of the door. Mrs Mann has always found this amusing as there was a window in this room that they could have escaped from if they wished but no-one seemed to have thought of that then! She also remembers that her sisters and herself were not allowed to eat in the kitchen with the POW and farm workers as it wasn’t thought ‘right’ for the young girls.

Although the following is not about the war in particular I thought it was worth taking note of. Children from the country were often teased and many chants were raised. The following Mrs Mann remembers well as she always took it personally.

What upset Mrs Mann so much about this verse was the fact that they had fine horses at Montgrew and everyone took great pride in them.

A lovely story from Mrs Mann about during the war — Three of her brothers were in the forces and when they were due home on leave their mother would stand at the front door of their house and watch the trains go past at the bottom of the field. (The railway line runs along the bottom of Montgrew Farm) When she saw a kit-bag being thrown out of the train into the field she knew one of her sons was almost home. Of course he walked home all the quicker from the station without the weight of his kit-bag! 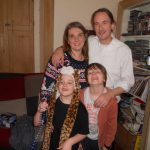 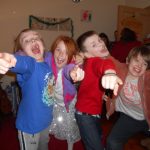 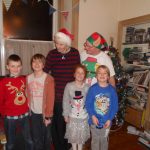 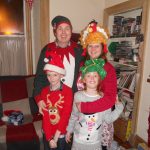