Mary Gordon was born in 1900 to John and Jane Gordon in Dufftown (York Street), where John worked as a Stillsman in a local distillery, likely to be Glenrinnes and/or Glenfiddich.

She never married and died tragically young in 1932, in Inverness (17 Haugh Street), from Tuberculosis.  Not much is known of Mary’s life except that she had worked as a Domestic Servant and Handmaid in Inverness.

Mary had two children to different fathers. The first child was John (Jock) Gordon Young who, although given the surname of the person registered on the birth certificate as father (who legally challenged being named as father, thus never married Mary), was brought up under the roof of the maternal grandparents John and Jane Gordon.  Jock emigrated to Australia after WWII.

The second of those children was Margaret (Gordon) Lynch, mother to Karen McKay the wife of the author of this website.

Mary was buried in an (as yet) unmarked family grave in the ‘new’ graveyard at Burghead, lair No. 202 – click here to see a picture of the exact location.  She is buried with her father, John Gordon (d. 1924), and younger sister Helen Jane Gordon (d. 1943).

Click on boxes shown below with green shading to navigate to linked pages. 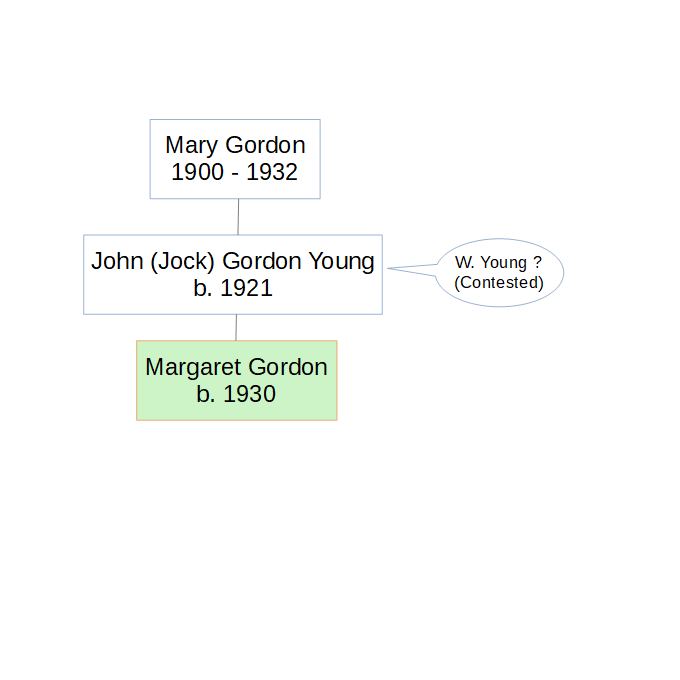