The John Gordon and Jane Rigby shown here have been identified from the birth certificate for Mary Gordon, Margaret (Gordon) Lynch’s mother and Karen (Lynch) McKay’s grandmother.  Although reasonably sure of details found, research is ongoing.

John Gordon was born in Glenrinnes and worked variously as a Stillsman (distillery worker – for sure at House no.24 Glenrinnes distillery, Keith, in 1906 with Mary as the youngest child, and also perhaps Glenfiddich in Dufftown and Strathisla in Keith depending on dates of their inception as distilleries) and Blacksmith Journeyman in Morayshire and Banffshire, and latterly as a Chemical Works Foreman in Burghead.  His children were born in Dufftown (York Street) or (Fife) Keith where the family lived for many years.

Helen Jane Gordon (a.k.a. Nellie) is shown as residing at 58 King Street Burghead at time of death in 1943 and was employed as a shop assistant.  In 1915 (18th Feb.) her address at birth is shown as 107 Regent Street, Keith. She died of T.B., a common cause of death up to the 20th century. The Gordon family is known also to have strong connections with 1 Station Street/Road, Burghead.  Helen Jane is buried in the lair of Alexander Gordon along with him, their father John, and Mary who died in Inverness 1932.

The colour coding in the chart below indicates, where known, the children born to the respective wives of John Gordon who were, in fact, sisters. Mary Gordon is marked differently to highlight her as grandmother to Karen McKay, wife of the website author. Mary was a daughter of Jane (Rigby) Gordon. 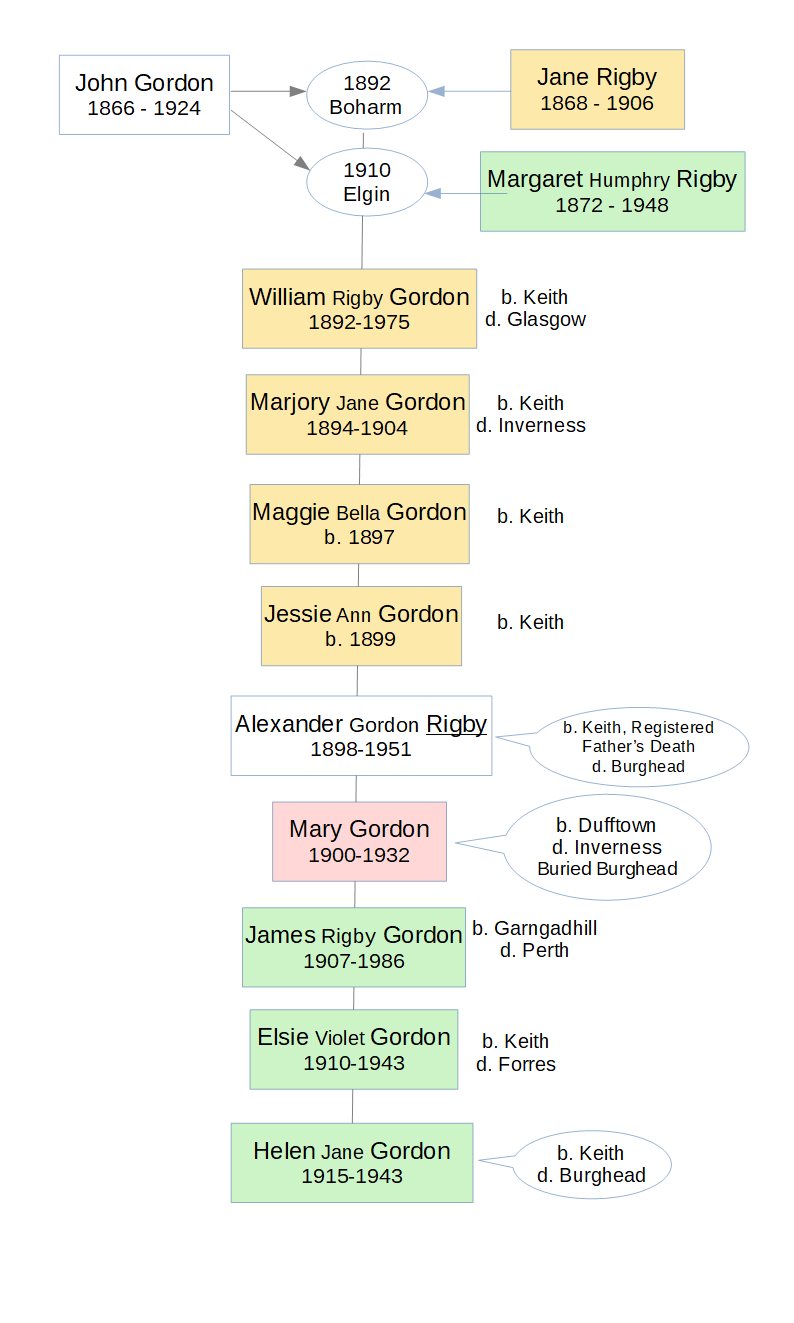 Jessie Gordon possibly married John Watt of Keith in 1920. They may be the parents of John Watt, cousin to Margaret (Gordon) Lynch and a hairdresser to trade, last known to be working in Glasgow.

Elsie Violet (known as Violet) married chauffeur Robert Fraser at Columba hotel in Inverness, 1931. The wedding was witnessed by Jane Gordon with the address of 17 Haugh Road Inverness which is the address given for Mary Gordon at the time of her death in 1932. That Jane Gordon has not yet been identified but is likely to have been a relative of John Gordon, Elsie’s father. The wedding was also witnessed by a James Fraser of 85 Grant Street Burghead, perhaps a relative of Robert Fraser ?

Elsie and Robert Fraser lived in Forres and are very likely to have been the parents of Winnie Munro (maiden name Fraser) who lived in Forres at the Benromach Distillery. Interestingly, Karen, wife of Bill McKay the website author has the middle names Winifred Fraser, named after Winnie.

Another coincidence: Bill’s family lived at Seafield farm a couple of miles north of Forres for a few years. Bill cycled past Benromach distillery every day on the way to and home from school in Forres. In 1963 following the accidental death of Lillian Lynch (Karen’s sister) at the age of 11 in Glasgow, Karen’s family visited Winnie for a few days at Benromach distillery. We may well have seen each other for the first time then, who knows, but we certainly did not know we would meet and marry in Glasgow 35 years later and some 180 miles away! In 1963 Bill was aged 10 and Karen 7.