Frank was in the Gordon Highlanders as a young man, becoming an NCO (Corporal), then commissioned into the Black Watch during WWII ultimately retiring with the rank of Captain.   He served in Gibraltar in 1937 (with the Gordons), and in Singapore and Cyprus and no doubt many other places.   Between periods of service in the army, he served as a policeman in Stonehaven before joining the military police in the Black Watch.

He married in 1940 in the Bothwell district to Annie Duncan Sommerville (1919-1977) from Uddingston.  They adopted daughter Alison and spent several years on overseas postings as a family with the Black Watch.  Sadly, Annie died in Alloa aged just 56. 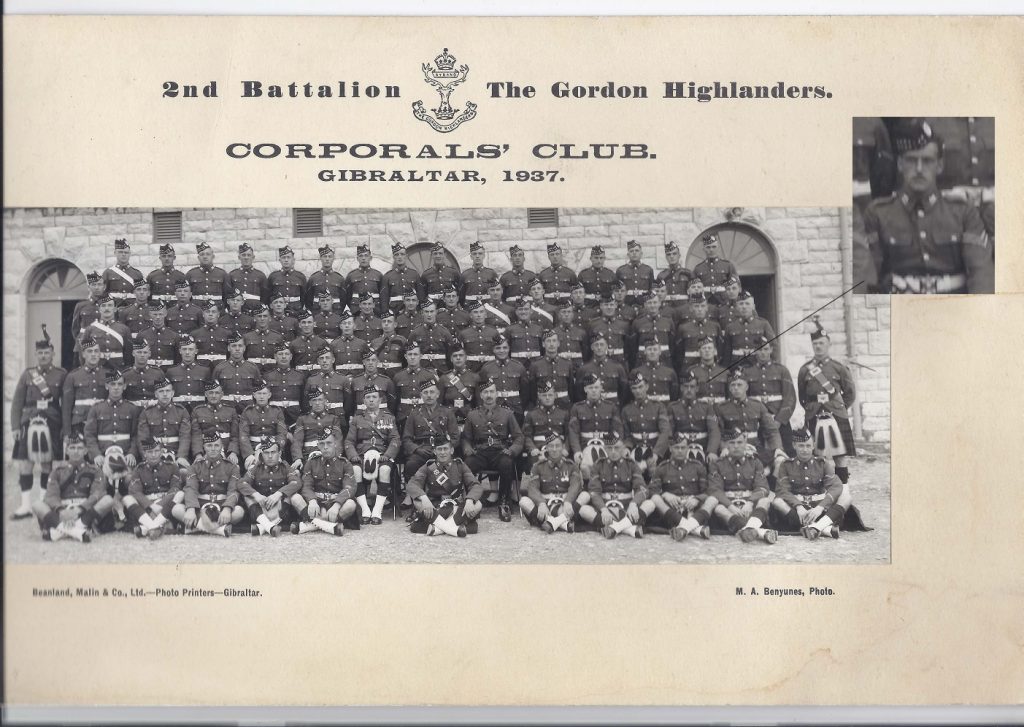 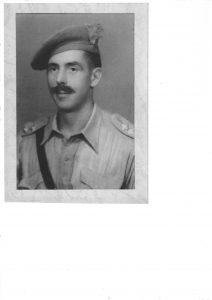 After a lengthy career in the army, Frank was employed by the Burton’s Biscuits company in Edinburgh (employment capacity unknown) before retiring completely.   Daughter Alison now lives on the Mull of Kintyre having earlier married and lived in Germany with her German husband.

Frank visited cousins in Canada after retiring, driving from Saskatchewan to Vancouver with a McKay relative, no doubt to visit McKays in British Columbia and on the way there.  He also visited his brother Alex in Australia, stopping en route in Singapore to pay respects at the grave of his brother Stephen who was killed in Malaysia in 1942 in service with the Gordon Highlanders.

The residence address in Gilmerton Road Edinburgh listed on Frank’s death certificate is for an Erskine veterans care home where Frank lived out his years until his death in 1994 after having lived with daughter Elizabeth and her husband Robert Tulloch for many years in Alloa and then in Edinburgh as Robert and Elizabeth relocated due to Robert’s employment as an engineer for the Distiller’s Company and ultimately the Holyrood Brewery in Edinburgh.

Like Bill (this website author), Frank’s daughter Elizabeth (Liz or Lizzie to Robert) spent time as a researcher at the National Records of Scotland in Edinburgh, and although not employed by them she was the originator of the early McKay family tree and documents which many members of the family have owned paper copies of over the years, and from which Bill has largely developed this website.  Robert Tulloch very kindly loaned a paper set of that document to Bill who has produced an electronic (PDF) version which may be viewed and/or downloaded by clicking here.

Elizabeth also had clients around the world for whom she used her expertise in genealogy to trace family connections.  Unfortunately she suffered a severe stoke several years ago and died at Braid Hills Care Home in Edinburgh on September 29th 2021.  She had red hair which she attributed to her maternal Sommerville family line, but there are known examples in the McKay line – certainly amongst children and grandchildren of John McKay of Montgrew (brother of Elizabeth’s grandfather Frank) and Frank himself. 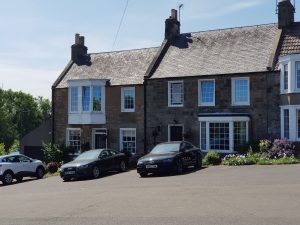 Interestingly (for Bill, that is) Frank apparently lived for a time in this house on ‘the square’ in the village of Kirkliston, the village where Bill and Karen have now lived for many years.   The house as it was and still is, is actually two houses knocked into one indicated by the two leftmost chimneys.

The square abuts the Church of Scotland parish church for Kirkliston, unlikely to have been attended by Frank however as he retained allegiance to the Roman Catholic faith throughout his life in the army and beyond.  Strictly speaking he may have lapsed in the ways of Catholicism in later life.  The McKay family from Glenlivet down to George McKay of Lockers croft in Newmill had been traditionally Catholic too, however for reasons documented elsewhere the mould was at least partially broken by George.  But it seems some of his children and grandchildren had and may still continue to maintain that traditional RC link.

In January 2021 a contact from London (Steve Milne) made through this website informs us it is highly likely (i.e. beyond doubt) that a daughter named Vera Sandison was born in Gartly (near Huntly) in 1932 to Frank, named as the father, and Janet Duncan Sandison, a domestic servant.  Steve is a nephew to Vera who died in 1979 in London having had no children although it is also believed she was buried in Huntly.  The 1952 & 1953 electoral rolls for Aberdeen show Vera listed under Foresterhill hospital (Cornhill Road) so the assumption is that she had become a nurse or otherwise engaged in a medical profession before moving to London in the late 1950s.

Janet, Vera’s mother, had had children earlier, and subsequent to, the birth of Vera in Huntly, and had a spouse. Frank is identified by name, by home address in Huntly, and also as a soldier in the Gordon Highlanders stationed at the time in Aldershot, and was pursued in court for alimony payment for the child in 1933, at the age of twenty.