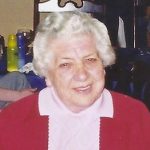 Coull antecedents can be found using the link above to her father's lineage.

Lizzie's personal marriage related family tree can be seen by going directly (click here) to Roger McKay's page or using the link above to her son Billy McKay and following McKay links found there.

Lizzie was a dedicated and caring mother for the majority of her life. Her early life was spent at 'the Knauchlands' near Rotheimay. Her education had been to the Scottish standard of her day, and she was very well accomplished in the three 'Rs' and highly polished in the domestic ritual of raising 5 boys and a girl.

In her early life she had worked 'in service' as a domestic servant to a banker, and to a minister of the Church of Scotland, and for a time had worked as an auxiliary nurse at Ladysbridge Hiospital, Banff (closed 2003). A picture of her in uniform is shown here dated late 1930's, approximately. In her later life as the children grew up Lizzie took part-time cleaning work, eventually retiring from working as a cleaner at Elgin College (previously Elgin Academy, now part of UHI, the University for the Highlands and Islands) for many years.

Roger and Lizzie were married in The Commercial Hotel in Moss Street, Keith, January 18th 1941. Robert was born January 19th, fortunately for all concerned not in the same year (ha ha), but in the following year of 1942. In January 1941 there had been many snow storms and deep snow prevailed, but the happy couple spent a few honeymoon days with Roger's sister Ivy and husband Sandy Morrison, near Forres, despite the snowdrifts.

Lizzie used to tell the story, perhaps of another snowbound time, when John McKay's older brother Peter had to transport the Minister to Church on a Sunday because of the deep snow with a pair of horse and a sled. Peter's way of driving the horse onwards was to shout 'Get up ya bugger' at which the Minister wryly commented 'That's a very interesting name for your horse, what do you call the other one ?' to which the reply came 'Ya bugger o' hell' from Peter, no doubt with an equally sarcastic smile.

As a girl, Lizzie had been 'Churched' and regularly attended Sunday School. Although not a Church-goer in adult life, she retained a strong set of morals throughout her entire life and had strong convictions about the rights and wrongs of this world. Her 'moral compass', to use a modern expression, was rarely inaccurate.

To her everlasting credit, Lizzie was committed to caring for all of her children however wayward or distant they appeared, in times of happiness and sorrow, and will forever be sorely missed.