Young Alfred went to Canada for Pilot training early in the war but whilst there transferred to the role of navigator.  It is not known if he had made (or was allowed to make) contact with our Canadian relatives at that time.

A YOUNG Dutch boy who witnessed the shooting down of a Lancaster bomber during World War Two, whose crew include a Speyside airman, has made an emotional visit to Moray.

Jan Berkers was just 10 when he saw the bomber from 12 Squadron crash into a river near the town of Asten.

Flying Officer Alfred McKay, navigator and crew member on the Lancaster, was only 21 when he and his six colleagues were shot down on April 27, 1944. He was from Knockando.

Mr Berkers, the son of a local farmer, never forgot the moment and more than 60 years later, along with his brothers Toon, Embert and Harrie, and a neighbour Martin Klaus, they built a memorial to the airmen.

Mr McKay, who was a toddler at the time of the incident and is himself a former RAF serviceman, attended a memorial service in Holland in 2007, a year after he read an appeal for information in ‘The Northern Scot’ by Dutch historian Theo van de Mortel.

His brother and the rest of the crew are buried in the Jonkerbos War Cemetery.

Theo van de Mortel had painstakingly researched the crash and uncovered details of the crew and where they were buried.

Mr McKay also received a report from the Ministry of Defence surrounding the loss of the Lancaster and the subsequent actions taken. They also managed to provide authentic copies of all next-of-kin wartime correspondence.

Mr McKay and his wife returned to Holland in 2009 to mark the 65th anniversary of the crash and he was able to organised a special flypast of the site by the Battle of Britain Memorial Flight Lancaster.

During their first visit to Moray last week, Mr McKay showed the Dutch party some of the sights of Moray and the Highlands, including Cardhu Distillery, Elgin Biblical Gardens, Culloden battlefield and the Black Isle.

The highlight of the stay was a visit to RAF Lossiemouth, where 12 Squadron is currently based and is a frontline Tornado bomber squadron.

They were given a tour of the base and a detailed insight into the work of the Tornado by Flight Lieutenant Neil Franklin.

The brothers speak little English so a Dutch-speaking liason officer, who is attached to the RAF base on a NATO exchange, provided a commentary in Dutch.

“We are so happy to be here to meet John and Marie and to be guests of RAF Lossiemouth 12 (B) Sqn and to see the Tornado aircraft. The visit was a highlight and a very special memory for me and our memorial group,” said Jan Berkers.

Embert said it was an honour to come to Scotland to visit John and Marie, who made them very welcome.

“Forres is now a very special place for us,” he added.

Mr McKay said the visit had been a great success and a special way to round off the last five years of contact with the Dutch memorial group.

The history surrounding the aircraft and the crash have been penned in a Dutch book of wartime events, called ‘Night Flight over the Peel’, which has been translated into English by a Dutch student for the McKays.

“This is a truly remarkable and emotional tribute to the brave airmen who perished on this German bombing mission,” said Mr McKay.

“This was an enjoyable meeting following our previous two visits to the Netherlands in 2007 and 2009,” he added.

Jan Berkers presented Mr McKay with a piece of burnt aluminium alloy which he recovered from the crash site and had kept all these years. 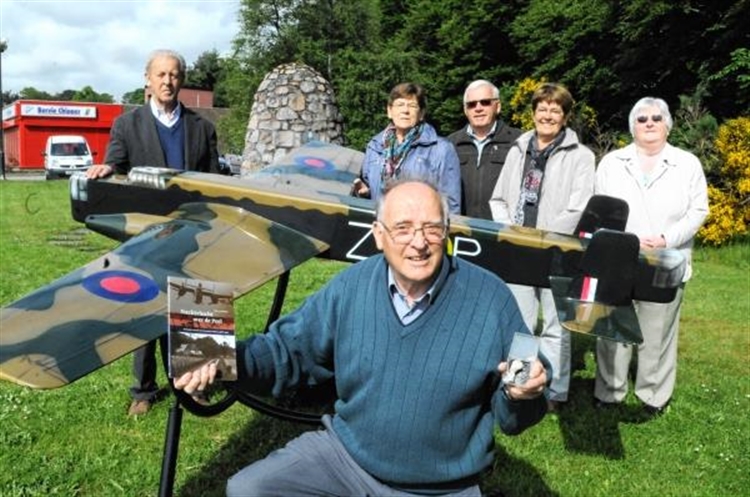